Third Party Blues
The Truth and Consequences of Two-Party Dominance 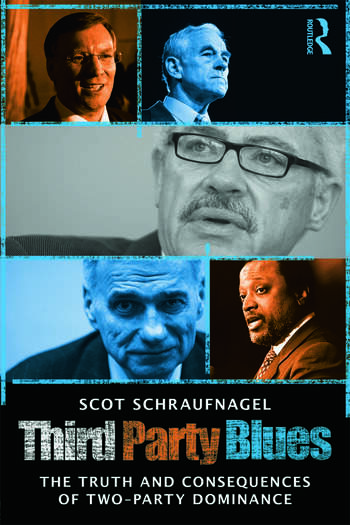 Third Party Blues: The Truth and Consequences of Two-Party Dominance

More than many areas of American politics research, studies of minor party competition and success are often overly driven by normative concerns that do not hold up to empirical scrutiny. This concise book presents a concerted effort to analyze the barriers in election law, such as ballot access restrictions and single member districts with a plurality rule, that prevent third parties from gaining a durable hold in American politics.

Rather than trudge through yet another history of third parties in America or polemical arguments for minor party inclusion, Schraufnagel provides empirical grounding for the claims of third party backers. This thoughtful analysis demonstrates that the inclusion of third parties improves electoral participation rates and that third party involvement in the legislative process is linked to landmark legislative productivity. In the end, the work provides thoughtful suggestions on the types of reforms that would lead to greater third party success in American elections.

Scot Schraufnagel is an Assistant Professor in the Department of Political Science at Northern Illinois University. His research and teaching focuses on political parties, elections, and legislatures in the United States, with an emphasis on promoting a civil, representative, and effective governing process. Schraufnagel has been recognized for teaching excellence and has been published in a number of leading political science journals.

"This is a thoughtful book that takes us beyond the traditional discussion of why the US does not have a third party. Instead, Schraufnagel asks not only what prevents third parties from gaining seats but also whether gaining seats is the only measure of success. This book shows us that third parties help push the two major parties to enact important legislation and does indeed improve voter turnout. Students of political parties, social movements and democratic theory will find much to like here!"
—Robin A. Kolodny, Temple University

"In Third Party Blues, Dr. Schraufnagel presents a view of third parties that challenges conventional wisdom in a number of ways. Using an array of empirical analyses guided by a strong normative concern for representation, he guides the reader through a compelling examination of the barriers to third parties and the potential consequences that result. While much attention has been focused on the current polarization of the two major parties, Third Party Blues breathes fresh insights and energy into the debate about parties more broadly and their role in representative government."
—Thomas M. Carsey, University of North Carolina - Chapel Hill

"Schraufnagel examines the variable history of third party success in American House elections and finds that the reduced success of third party candidates has had real, negative consequences for electoral participation, the crafting of important public policy, and good governance in general in the United States. An important read for all students of parties and elections in America."
—Mark D. Brewer, University of Maine

"In this lively analysis, Scot Schraufnagel not only illuminates why Republican-Democratic duopoly persists, but also makes a bold case that widespread dissatisfaction with politics and governance is a result of too few parties. With his careful review of history and of the role of institutions and laws in preserving an atypical party system that is too often casually taken to be natural or inevitable, he presents a plan of action. On the heels of a Republican rout in 2006 and a Democratic shellacking in 2010, the American public now seems fed up with both donkeys and elephants. This book could not be more timely."
—Brian Gaines, University of Illinois at Urbana-Champaign

"As anyone who has taught undergraduates in recent years can attest, students are increasingly interested in third parties. In Third Party Blues, Scot Schraufnagel tackles the important questions that students often ask. This book will be of considerable interest to students, political scientists, and citizens concerned about the nature of party competition in the United States."
—David Darmofal, University of South Carolina