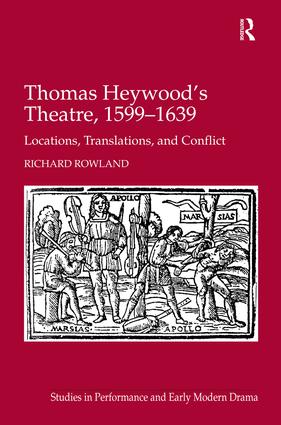 In this major reassessment of his subject, Richard Rowland restores Thomas Heywood-playwright, miscellanist and translator-to his rightful place in early modern theatre history. Rowland contextualizes and historicizes this important contemporary of Shakespeare, locating him on the geographic and cultural map of London through the business Heywood conducts in his writing. Arguing that Heywood's theatrical output deserves the same attention and study that has been directed towards Shakespeare, Jonson, and more recently Middleton, this book looks at three periods of Heywood's creativity: the end of the Elizabethan era and the beginning of the Jacobean, the mid 1620s, and the mid to late 1630s. By locating the works of those years precisely in the political and cultural conflicts to which they respond, Rowland initiates a major reassessment of the remarkable achievements of this playwright. Rowland also pays attention to Heywood in performance, seeing this writer as a jobbing playwright working in an industry that depended on making writing work. Finally, the author explores how Heywood participated in the civic life of London in his writings beyond the playhouse. Here Rowland examines pamphlets, translations, and the sequence of lord mayor's pageants that Heywood produced as the political crisis deepened. Offering close readings of Heywood that establish the range, quality and theatrical significance of the writing, Thomas Heywood's Theatre, 1599-1639 fits a fascinating piece into the emerging picture of the 'complete' early modern English theatre.

'Thomas Heywood’s Theatre, 1599-1639 fits a fascinating piece into the emerging picture of the "complete" early modern theatre. Rowland beds interpretation firmly in cultural, historical, and textual recuperation and analysis. He lets us know the weight and value of things in their time. He connects things to people and people to each other. He offers genealogies of circumstance and familiarity that vastly enrich our reading of the plays. He puts the authentic stink of London and her citizens into our nostrils. Rowland’s writing about Heywood makes you want to read Heywood - and even more, to see Heywood restored to our theatre.' Carol Chillington Rutter, University of Warwick, UK 'Richard Rowland’s lively study of Heywood is equally evocative of early modern London, demonstrating how the burgeoning self-awareness of the city and its citizens infused the drama appearing on its stages. The specificity of location in Edward IV is more than incidental to the drama, and owes much to the contemporary publication of John Stow’s Survey of London which helped to make topographical reference both safe and widely understood. Rowland further shows how Heywood explores another key component of early modern London society, the nexus of home, house and household. Here the emphasis is spatial rather than topographical, but the difficulties and dangers of metropolitan marriage and householding emerge clearly. Rowland argues that our appreciation of the complexity and power of Heywood’s drama gains greatly from its performance on stage, but this book will make at least an equal contribution to that end.' Vanessa Harding, Birkbeck, University of London, UK '…a work of fine scholarship… a significant and welcome achievement guiding us to reappraise a playwriting career that has too often been neglected…' Times Literary Supplement '… this excellent monograph is evidence of the importance of continuing scholarly work on this neglected playwright. It makes a s

Contents: Introduction; Part I Heywood's English Landscapes: A 'London that yee see hourely': Heywood, Stow, and the invention of the city staged; Moving inside(s): Heywood's divided households. Part II Staging Roman Comedy in Stuart London: Introduction: stages of translation in early modern England; 'Of coyne and prtious marchandyse': trade and slavery in The Captives; 'Some mirth, some matter': the innovative tragicomedy of The English Traveller; Out of the dripping pan, into the fire: Loves Mistris. Part III Street Theatre: London's peaceable estate? The pageants; Index.

Richard Rowland is Senior Lecturer in Drama and English, University of York, UK.

This series presents original research on theatre histories and performance histories; the time period covered is from about 1500 to the early 18th century. Studies in which women's activities are a central feature of discussion are especially of interest; this may include women as financial or technical support (patrons, musicians, dancers, seamstresses, wig-makers) or house support staff (e.g., gatherers), rather than performance per se. We also welcome critiques of early modern drama that take into account the production values of the plays and rely on period records of performance.