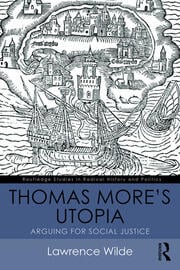 The 500th anniversary of the first publication of Thomas More’s Utopia invites a reappraisal of its significance, not just as an ironic and playful fiction, but as a serious contribution to social and political thought. More delivers a searing critique of the injustices of his time and imagines a radical alternative based on common ownership and representative government. In this new interpretation, Wilde surveys the context from which Utopia emerged and analyses its key themes – politics, economics, social relations, crime and punishment, war and religion. Although the society of the Utopians is created as a remedy to the ailments of the old world, there are restrictions on individual freedom which reflect More’s suspicion of human nature’s innate fragility. Wilde argues that this should not detract from the power of the book in challenging the root causes of inequality and oppression.

The true legacy of Utopia lies in its plea for social justice in the face of a world driven by greed and the lust for power. A compelling case is made for the continued relevance of this masterpiece, a legacy that should not be diminished by attempts to discredit More’s character, which are dealt with here in the epilogue. Offering a new perspective on this important historical text, this book is essential reading for students and scholars working in radical politics, the history of social thought and literature, as well as anyone interested in learning more about this fascinating work.

1. More and His Masterpiece

2. Reason, Faith and Discovery: The Context of Utopia

7. The Achievement of Utopia

This is a rich and nuanced analysis of a truly enigmatic text. Wilde elegantly and deftly explores the complexities of the work to try to determine More's intentions, and seeks to relate these to pressing contemporary socio-political problems. A fine addition to the literature.

Thomas More's Utopia is a work of radical social and political theory which is of continuing relevance. Larry Wilde does justice to a work that is dedicated to social justice. He sets the text in context and explores its radicalism and answers questions relating to its author and its meaning. This is an excellent study of More that deserves to be widely read, by students, scholars and all those interested in political radicalism and social justice.

Lawrence Wilde has brought his wealth of intellectual acumen to bear upon one of the most renowned and contentious texts to have emanated from an Englishman's pen. He shows convincingly how, through the medium of fiction, a profound political statement was thrust upon the world. More's Utopia is the prelude to many of the pressing issues of the early modern period and on to the present day, including vegetarianism; animal rights; the ordination of women priests; but most strikingly social oppression and elite privilege. It is five hundred years since the publication of More's Utopia, but Professor Wilde has made it resonate with our deepest contemporary concerns and sentiments.

Wilde’s nuanced study of the complexities of Thomas More’s groundbreaking call for a just society in the developing English nation could not be more timely given the 500th anniversary of Utopia. Through this critical work, More created a method of radical analysis and transformation that is ever more necessary in the quest for ecological and social justice in contemporary societies.