Threescore and More
Applying the Assets of Maturity, Wisdom, and Experience for Personal and Professional Success 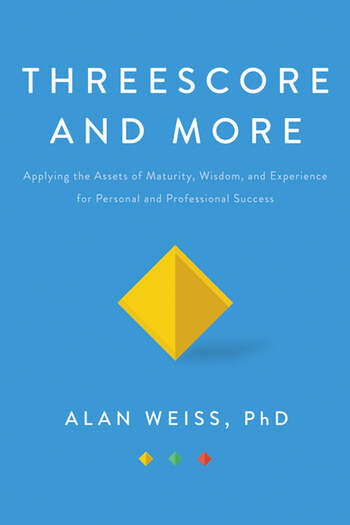 Threescore and More: Applying the Assets of Maturity, Wisdom, and Experience for Personal and Professional Success

Ageism is too often an accepted form of bias, even though the facts support the value of aging. Airline pilots forced to retire at the arbitrary age of 65 are usually at the top of their game. Forced retirement in most organizations remove highly skilled performers as well as role models and trainers for newer generations. Instead of revelling in who we are, we begin to try to look younger as soon as possible, with 16-year-old women receiving nose and breast surgery as birthday presents. People have become inured to "losing" abilities as they age instead of appreciating new abilities that only age can bestow. Everyone extols the need for gender equality, lest we lose the talents of half of our population. Yet, people over 65 are currently 15 percent of the US population (46.2 million) and is projected to rise to 34 percent. Due to the IRA legislation of the Reagan era — and the lack of need to purchase homes, college educations, cars, or health care—the discretionary assets are also substantial. It's time these people took control of their lives and influence on everything from business to politics.

The Myth of Boomers, Greatest Generations, Millennials, and Gen-Anything ; The Future Began Yesterday; Power Increases with Age; Biceps, Quads, and Self-Esteem Are All Muscles; Critical Thinking Is Redundant; The Non-Government Safety Net; Forgiveness Is Not Easier Than Simply Appropriating Permission; Eliminating Scarcity in Your Soul; Healthy Outrage; Defying Age

Alan Weiss is one of those rare people who can say he is a consultant, speaker, and author and mean it. His consulting firm, Summit Consulting Group, Inc., has attracted clients such as Merck, Hewlett-Packard, GE, Mercedes-Benz, State Street Corporation, Times Mirror Group, The Federal Reserve, The New York Times Corporation, Toyota, and over 500 other leading organizations. He has served on the boards of directors of the Trinity Repertory Company, a Tony-Award-winning New England regional theater, Festival Ballet, and chaired the Newport International Film Festival.

His speaking typically includes 20 keynotes a year at major conferences, and he has been a visiting faculty member at Case Western Reserve University, Boston College, Tufts, St. John’s, the University of Illinois, the Institute of Management Studies, and the University of Georgia Graduate School of Business. He has held an appointment as adjunct professor in the Graduate School of Business at the University of Rhode Island where he taught courses on advanced management and consulting skills to MBA and PhD candidates. He once held the record for selling out the highest priced workshop (on entrepreneurialism) in the then-21-year history of New York City’s Learning Annex. His Ph.D. is in psychology. He has served on the Board of Governors of Harvard University’s Center for Mental Health and the Media.

He is an inductee into the Professional Speaking Hall of Fame® and the concurrent recipient of the National Speakers Association Council of Peers Award of Excellence, representing the top 1% of professional speakers in the world. He has been named a Fellow of the Institute of Management Consultants, one of only two people in history holding both those designations.

His prolific publishing includes over 500 articles and 60 books, including his best-seller, Million Dollar Consulting (from McGraw-Hill) now in its 25th year and fifth edition. His newest is Million Dollar Maverick (Bibliomotion, 2016). His books have been on the curricula at Villanova, Temple University, and the Wharton School of Business, and have been translated into 12 languages.

He is interviewed and quoted frequently in the media. His career has taken him to 60 countries and 49 states. (He is afraid to go to North Dakota.) Success Magazine cited him in an editorial devoted to his work as "a worldwide expert in executive education." The New York Post called him "one of the most highly regarded independent consultants in America." He is the winner of the prestigious Axiem Award for Excellence in Audio Presentation.

He is the recipient of the Lifetime Achievement Award of the American Press Institute, the first-ever for a non-journalist, and one of only seven awarded in the 65-year history of the association. He holds an annual Thought Leadership Conference which draws world famous experts as speakers. In 2014 his featured speaker was political pundit, best-selling author, and media favorite James Carville, in 2015 Master of Influence Robert Cialdini, and in 2016 Dan Gilbert of Harvard who has over 15 million views of his TED talk on happiness.

He has coached former candidates for Miss Rhode Island/Miss America in interviewing skills. He once appeared on the popular American TV game show Jeopardy, where he lost badly in the first round to a dancing waiter from Iowa.