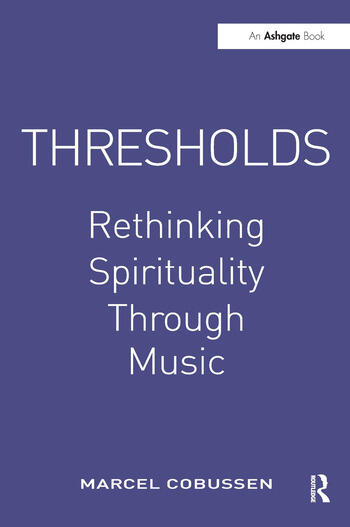 In Thresholds Marcel Cobussen rethinks the relationship between music and spirituality. The point of departure is the current movement within contemporary classical music known as New Spiritual Music, with as its main representatives Arvo PÃ¤rt, John Tavener, and Giya Kancheli. In almost all respects, the musical principles of the new spiritual music seem to be diametrically opposed to those of modernism: repetition and rest versus development and progress, tradition and familiarity versus innovation and experiment, communication versus individualism and conceptualism, tonality versus atonality, and so on. As such, this movement is often considered as part of the much larger complex called postmodernism. Joining in with ideas on spirituality as presented by Michel de Certeau and Mark C. Taylor, Cobussen deconstructs the classification of the 'spiritual dimensions' of music as described above. Thresholds presents an idea of spirituality in and through music that counters strategies of exclusion and mastering of alterity and connects it to wandering, erring, and roving. Using the philosophy of Martin Heidegger, Georges Bataille, Jean-FranÃ§ois Lyotard, Jacques Derrida and others, and analysing the music of John Coltrane, the mythical Sirens, Arvo PÃ¤rt, and The Eagles (to mention a few), Cobussen regards spirituality as a (non)concept that escapes categorization, classification, and linguistic descriptions. Spirituality is a-topological, non-discursive and a manifestation of 'otherness'. And it is precisely music (or better: listening to music) that induces these thoughts: by carefully encountering, analysing, and evaluating certain examples from classical, jazz, pop and world music it is possible to detach spirituality from concepts of otherworldliness and transcendentalism. Thresholds opens a space in which spirituality can be connected to music that is not commonly considered in this light, thereby enriching the ways of approaching and discussing music. In order to achieve this, it is necessary to show that spirituality is not an attribute of music, not a simple adjective providing extra information or used to categorize certain types of music. Instead, the spiritual can happen through listening to music, in a more or less personalized relationship with it. This relationship might be characterized as susceptible instead of controlling, open instead of excluding, groping instead of rigid.

Contents: The desert in the desert; A short prelude to music and spirituality; Stories; New spiritual music; Between heaven and earth; Sirens; Language, spirituality, music; Wanderings; The abyss; Silence; Listening to music; Para-spirituality; The bridge and the laugh; Bibliography; Index.

'In his book, Cobussen locates the meaningfulness of music and the experience of spirituality at "thresholds": liminal sites that reside just beyond our verbal grasp. He composes his text with great delicacy, as if it were itself a piece of music or a spiritual meditation. A beautiful, haunting book.' Susan McClary, UCLA International Institute, USA 'How, Marcel Cobussen asks in this unusual and invigorating book, do we dare still speak of spirituality and music?' The answers he provides form the first comprehensive effort to think through this challenging but strangely neglected topic. The writing is rich, the intellectual canvas is broad, and the arguments break with virtually all conventional wisdom about both spirituality and music. Cobussen boldly seeks to perform as well as describe a spirituality he locates in a relationship to otherness on a threshold that cannot be mastered or ritualized. His is a book that practices what it preaches.' Lawrence Kramer, Fordham University, USA ’This work opens a space in which spirituality can be connected to music that is not commonly considered in this light, thereby enriching the ways of approaching and discussing music.’ Studies in Spirituality ’Marcel Cobussen’s book poses some crucial and probing questions concerning the relationship between music and spirituality. ... In Thresholds, Marcel Cobussen combines a sometimes dazzling array of literary, philosophical, and personal references, and challenges the reader to reimagine the mystery and transcendence of the spiritual: evoked though music, it becomes paradoxical, ambulating, there and not there.’ Notes ’Thresholds not only opens up spaces for thought, it also promotes many questions about music and spirituality that will undoubtedly be explored by scholars in years to come.’ Music and Letters