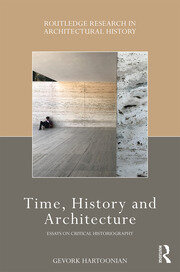 Time, History and Architecture presents a series of essays on critical historiography, each addressing a different topic, to elucidate the importance of two influential figures Walter Benjamin and Gottfried Semper for architectural history. In a work exploring themes such as time, autonomy and periodization, author Gevork Hartoonian unpacks the formation of architectural history; the problem of autonomy in criticism and the historiographic narrative. Considering the scope of criticism informing the contemporaneity of architecture, the book explores the concept of nonsimultaneity, and introduces retrospective criticism the agent of critical historiography. An engaging thematic dialogue for academics and upper-level graduate students interested in architectural history and theory, this book aims to deconstruct the certainties of historicism and to raise new questions and interpretations from established critical canons.

"Inspired by the messianic Marxism of Walter Benjamin, this is a critical work of exceptional depth and erudition that reflects on the interrelated predicament of architecture and history as these are compelled to confront a spontaneously escalating deconstruction of our received notions of both modernity and time. It is undeniable that these spontaneously disintegrate before the combined onslaughts of technological maximization, hyper-commodification and an ever increasing maldistribution of wealth."

"In nine acute essays, Gevork Hartoonian considers from multiple vantage points some of the most provocative questions raised by architecture and its history in the past decades. The erudite reverberations he orchestrates between critical theory, the humanities and the corpus of the architectural discourse itself reshape our understanding of the historical narrative and help to measure its productivity today. A brilliant contribution to the ongoing discussion about the architectural discipline and its struggle for autonomy."

"Few have attempted one of the key tasks for modern architectural history, namely to trace the profound relationships between 19th century theories and 20th century avant-garde practices through the lens of changing concepts of historicity.  With provocative readings of Walter Benjamin in particular, Gervork Hartoonian, offers us fresh insights into the work of some of the key figures in architectural culture from Gottfried Semper to Mies van der Rohe."