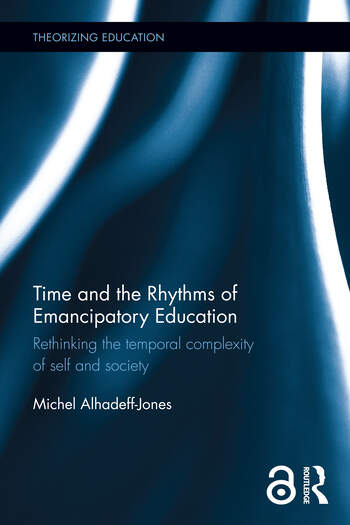 Time and the Rhythms of Emancipatory Education: Rethinking the temporal complexity of self and society

Time and the Rhythms of Emancipatory Education argues that by rethinking the way we relate to time, we can fundamentally rethink the way we conceive education. Beyond the contemporary rhetoric of acceleration, speed, urgency or slowness, this book provides an epistemological, historical and theoretical framework that will serve as a comprehensive resource for critical reflection on the relationship between the experience of time and emancipatory education.

Drawing upon time and rhythm studies, complexity theories and educational research, Alhadeff-Jones reflects upon the temporal and rhythmic dimensions of education in order to (re)theorize and address current societal and educational challenges. The book is divided into three parts. The first begins by discussing the specificities inherent to the study of time in educational sciences. The second contextualizes the evolution of temporal constraints that determine the ways education is institutionalized, organized, and experienced. The third and final part questions the meanings of emancipatory education in a context of temporal alienation.

This is the first book to provide a broad overview of European and North-American theories that inform both the ideas of time and rhythm in educational sciences, from school instruction, curriculum design and arts education, to vocational training, lifelong learning and educational policies. It will be of key interest to academics, researchers and postgraduate students in the fields of philosophy of education, sociology of education, history of education, psychology, curriculum and learning theory, and adult education.

Introduction: How to establish the educational values of time?

Part I: The study of time in educational sciences

1. The study of time and its epistemological challenges

3. The functions and meanings of temporal constraints in education

Part II: The evolution of temporal constraints and the rhythms of education

4. The evolution of temporal discipline in education, from Antiquity to the Early Modern period

5. Temporal efficiency and rhythmic harmony, two competing educational ideals at the turn of the 20th century

6. The raise of temporal double binds in formal education throughout the second half of the 20th century

7. The rhythms of lifelong learning, between continuity and discontinuity

Part III: Theorizing the rhythms of emancipation in education

8. The meanings of emancipation within a context of temporal alienation

9. Toward a rhythmic theory of emancipation in education

11. The moment of emancipation and the rhythmic patterns of transgression

12. The emergence of a rhythmological critique and the moment of theory in education

Michel Alhadeff-Jones is a psychosociologist and a philosopher of education. He works as an adjunct associate professor in the Adult Learning and Leadership Program at Teachers College, Columbia University. In Europe, he teaches at the universities of Fribourg and Geneva (Switzerland) and he is associated to the French Laboratory of Research EXPERICE (Experience, Cultural Resources and Education) at the University of Paris. He is the founder of the Sunkhronos Institute located in Geneva.

‘A probing exploration of the temporal dimensions of education. This book is an intellectual masterpiece that will set the standard for a long time to come.’

‘Questioning common assumptions regarding temporal rhythms is inherently transgressive. In this fascinating and groundbreaking theoretical analysis, Michel Alhadeff-Jones explores the intersection of temporal rhythms, learning processes and the dynamics of emancipatory education.’

‘Unlike the scientist who quests for the instant of understanding, the educator has to make an ally of the full stretch of time. He or she needs to develop an appreciation of time’s heterogeneous and contradictory nature rather than seeing it simply as the foe of speed and efficiency. Michel Alhadeff-Jones’s study constitutes the richest examination of educational temporality I have ever encountered. It is immensely learned, assembling and responding to a body of literature that crosses multiple scholarly fields; it is penetratingly insightful, particularly in the way it explains how emancipation is, literally, a matter of rhythm; and it is utterly original. Educational theorists will find ample food for thought and debate in this book and educators, a groundbreaking way of reconceiving of their practice.’

‘This deeply thoughtful book merits our attention so as to appreciate time’s complexity, the subtlety of the analysis and its emancipatory intent. We often experience time as tyranny, at work, in classrooms, in families or as a general aspect of ‘hyper-modernity’. Time may never seem our own. But there are routes to emancipation by taking time out to recognize tyrannies and how to transgress them. This compelling book combines interdisciplinary understanding with biographical sensibility to consider temporal constraints and resistance to them. So take time to read it and consider time’s biological, psychological, cultural and emancipatory rhythms. Giving time to the book will in fact be a good, transgressive act in its own right!’

‘A very rich narrative on how diverse experiences of time structure our educational and learning experiences and vice-versa. Drawing on both continental and Anglo-American multidisciplinary sources, Michel Alhadeff-Jones constructs a framework that enables researchers and practitioners to explore new ways of considering how ‘life rhythms’ and institutional practices of work and learning often contradict each other, yet, how these conflicts can also be the source of emancipatory trajectories of both individuals and collectivities. A groundbreaking work that takes the reader step by step on an inspiring journey, from reductionist approaches to complexity-inspired views on human learning and education, whilst transgressing the boundaries between diverse practices such as formal and non-formal education, social work, vocational education and training and human resource development. The work opens new perspectives on how to conceive of emancipation in connection with the rhythms of life of individuals, institutions and societies.’