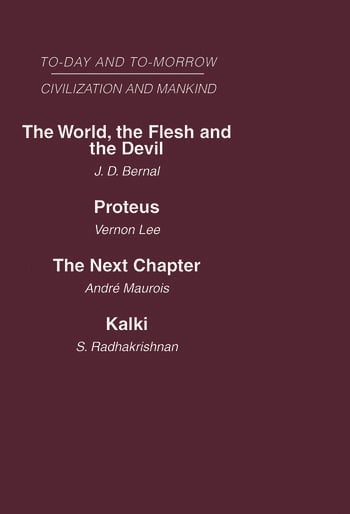 The Dance of Civa

"It has substance and thought to it." Spectator

"A very interesting account of the work of Sir Jagadis Bose." Oxford Magazine

This essay suggests that recognition of the ceaseless flow of the Dance of Civa (Life and Death) is the most promising cure for the misunderstandings that have arisen from a Western habit of assuming that conventional categories have tangible existence.

Glimpses of the Future

"A wonderful vision of the future. A book that will be talked about." Daily Graphic

This volume discusses the possible advances of life on earth and asks whether a new race will arise or whether the earth will remain the dominant planet in the solar system for human life.

Ethnos or the Problem of Race

The author argues that the global unrest of the 1930s arises from qualities inherent in human races and he maintains that if the world is to have peace the problems engendered by diversity of race must first be understood.

Or the Future of Man

This volume discusses the threats which face mankind and ways in which destruction may be avoided.