Today and Tomorrow Vol 10 Science & Medicine
The Mongol in Our Midst Prometheus, or Biology and the Advancement of Man Metanthropos or the Body of the Future Pygmalion or the Doctor of the Future The Conquest of Cancer 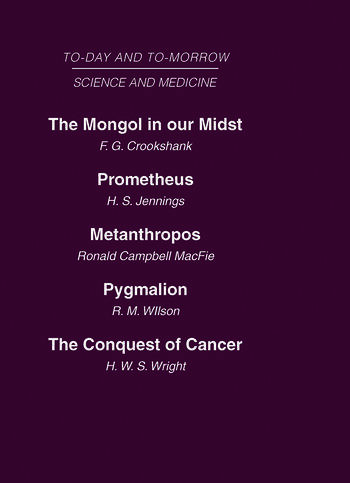 Today and Tomorrow Vol 10 Science & Medicine: The Mongol in Our Midst Prometheus, or Biology and the Advancement of Man Metanthropos or the Body of the Future Pygmalion or the Doctor of the Future The Conquest of Cancer

The Mongol in Our Midst

Combining anthropology, psychology, geography, science and medicine, this volume was a ground-breaking study in the area of race, ethnicity and eugenics, when first published and has to be read in the appropriate historical, social and scientific context of the early twentieth century.

Prometheus or Biology and the Advancement of Man

"This volume is one of the most remarkable that has yet appeared in this series." Times Literary Supplement

This volume provides a lucid summary of the striking advances of the early 20th century in biological knowledge, genetics, and the theory of evolution.

Metanthropos or the Body of the Future

"Should certainly be read by a large public." The Lancet

Drawing on the history of evolution and geology, this volume examines the role of society on physical, emotional and psychological changes in the population of Western Europe during the early twentieth century, whilst attempting to predict genetic developments of the future.

Pygmalion or the Doctor of the Future

"No doctor worth his salt would venture to say that Dr.Wilson was wrong." Daily Herald

"Dr Wilson has added a brilliant essay to this series." Times Literary Supplement

The author foresees an evolution in the personality of the doctor, who will become less of a scientist, more of a humanist, and use every spiritual agency, as well as every practical measure, to restore the human body and soul to health.

The Conquest of Cancer

Whilst affirming that the causes and treatment of cancer will never be solved by the efforts of the medical profession alone, this volume provides an accessible source of information on cancer and proposes routine examination for those people aged 40 and over as the best means of defence against cancer.

Today and Tomorrow Volume 10 Science and Medicine reprints The Mongol in Our Midst by F G Crookshank, Prometheus or Biology and the Advancement of Man by H S Jennings, Metanthropos or the Body of the Future by Ronald Campbell Macfie, Pygmalion or the Doctor of the Future by R M Wilson and The Conquest of Cancer by H W S Wright. 482pp