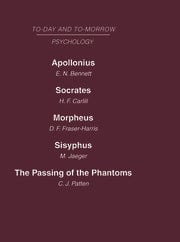 Volume 11 Apollonius, or the Future of Psychical Research

"His exposition of the case for psychic research is lucid and interesting." The Scotsman

This volume summarizes the results secured by the scientific treatment of psychical phenomena, and to forecast the future developments of such research.

Or the Emancipation of Mankind

"One of the most brilliant and important of a remarkable series." Westminster Gazette

This volume examines the differences between humans and animals and discusses the freedom that a proper understanding of psychology will bring to the human race. The author argues that the whole psycho-physical organism will be regarded as what it is – a mechanism full of inherited tendencies and untapped energies which needs to be consciously adjusted and controlled.

Morpheus or the Future of Sleep

"His arguments, clearly and ably presented, hold our interest." Clarion

"Shows that the doctors do not as yet know much about the subject." Queen

This volume discusses sleep and the part it plays in maintaining health. It contains suggestions for sufferers from insomnia, discusses dreams and their causes and suggests the probable line of investigation of sleep problems.

Sisyphus or the Limits of Psychology

"Much acumen and knowledge. All students of psychology should read it." Manchester Guardian

This volume argues that Psychology (although a "young" science in 1929) has just as an important role to play as Physics and Chemistry, because it affects the ordinary person and is not merely limited to the scientific community. The opportunities is provides, as well as its limits, are discussed.

The Passing of The Phantoms

A Study of Evolutionary Psychology and Morals

Today and Tomorrow Volume 11 Psychology includes Apollonius, or the Future of Psychical Research by E N Bennett, Socrates, or the Emancipation of Mankind by H F Carlill, Morpheus or the Future of Sleep by D F Fraser-Harris, Sisyphus or the Limits of Psychology by M Jaeger and The Passing of The Phantoms: A Study of Evolutionary Psychology and Morals by C J Patten. 478pp