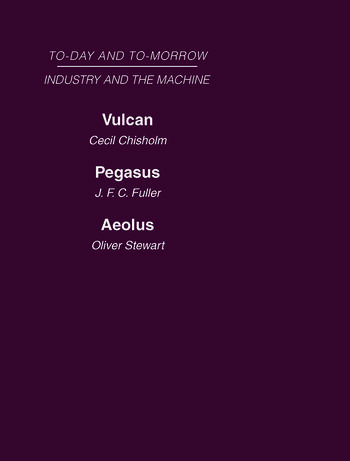 Vulcan or the Future of Labour

"Vulcan is a little book but between its covers knowledge and vision are brimming over." Spectator

The author argues that the creative genius of the human race which at the beginning of the twentieth century was centred on production machinery will eventually release factory workers from poverty.

"The foremost military prophet of the day propounds a solution for industrial and unemployment problems. A bold essay…" Daily Telegraph

This volume provides a brief review of the history of the railway and discusses the uses and benefits of roadless vehicles, such as tanks, not only for their transport capacities but also as a means for solving unemployment.

Aeolus or the Future of the Flying Machine

"There is nothing vague in these imaginative forecasts." Daily News

"The author is to be congratulated…" Aeroplane

This volume describes the air-vehicle and air-battleship of the future and predicts that it will resist mass production, being regarded as individual creations of the Artist-Scientist rather than commercial tools.

Today and Tomorrow Volume 13 Industry and the Machine includes Vulcan or the Future of Labour by Cecil Chisholm, Pegasus: Problems of Transportation by J F C Fuller,  and Aeolus or the Future of the Flying Machine by Oliver Stewart.  292pp