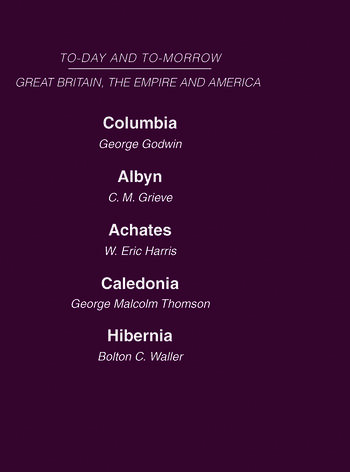 Or the Future of Canada

In this volume the future of Canada is discussed from political, social and economic standpoints. The possibility of Canada’s union with America is also examined.

Or Scotland and the Future

A vigorous answer, explicit and implicit to Caledonia, tracing the movements of a real Scottish revival, in music, art, literature and politics and coming to the conclusion that there is a chance for the regeneration of the Scottish people.

Achates, or Canada in the Empire

An answer to Columbia, written by a Canadian, maintaining that Canada will maintain herself as before within the British Empire and co-operation (but no more) with the United States.

Or the Future of the Scots

"It is relentless and terrible in its exposure of the realities that underlie the myth of "the canny Scot"." Irish Statesman

"As a piece of incisive writing and powerful yet restrained invective, Caledonia is specially notable." Spectator

Highly critical of post-Union policy in Scotland, this volume presents a scathing analysis of the Scot and his country in the first half of the twentieth century.

Hibernia or the Future of Ireland

"An earnest and challenging piece of work." Irish Times

This volume maintains that Ireland is being re-born and that whilst rebirth is a painful process it is nonetheless a joyful event.