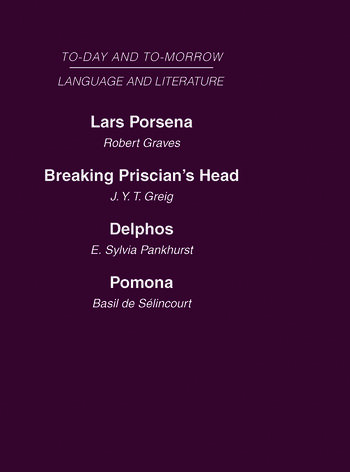 Or the Future of Swearing

"Not for squeamish readers." Spectator

"Humour and style are beyond criticism." Irish Statesman

As relevant now as when it was first published, this volume and its ironic look at the political correctness of society has become a classic of the Today & Tomorrow series.

Or English As She Will Be Spoke and Wrote

"The most vehement attack (on standard English) we have ever read." Morning Post

This volume discusses the nature of language, grammar, the influence of America, of slang dialect and many other subjects.

The Future of International Language

In this volume, Sylvia Pankhurst argues that an international language would be one of the greatest assets to modern civilization. She surveys past attempts from the sixteenth to the early twentieth centuries and predicts the arrival of the inter-language, its form, its social and cultural utility and its influence for world peace.

Pomona or the Future of English

"Equal to anything yet produced in this brilliant series." Spectator

An analysis of the present condition of the English language and the paths along which it is progressing.

Today and Tomorrow Volume 20 Language and Literature includes Lars Porsena, Or the Future of Swearing by Robert Graves, Breaking Priscian’s Head, Or English As She Will Be Spoke and Wrote by J Y T Greig, Delphos The Future of International Language by E Sylvia Pankhurst and Pomona or the Future of English by Basil de Sélincourt. 382pp