Today and Tomorrow Volume 24 Music and Drama
Terpander or Music and the Future Timotheus: the Future of the Theatre Iconoclastes or the Future of Shakespeare Eurydice or the Nature of Opera Orpheus or the Music of the Future 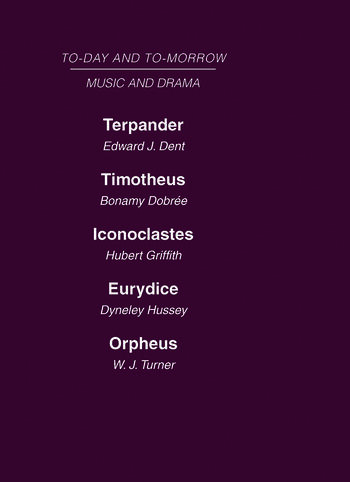 Today and Tomorrow Volume 24 Music and Drama: Terpander or Music and the Future Timotheus: the Future of the Theatre Iconoclastes or the Future of Shakespeare Eurydice or the Nature of Opera Orpheus or the Music of the Future

Or Music and the Future

"…a skilful review of the development of music." Musical News

With reference to the works of Bach, Beethoven, Byrd, Cimarosa, Elgar, Handel, Haydn, Mozart, Purcell, Rameau, Scriabin, Strauss and Tchaikovsky this volume examines the challenges facing the appreciation of music in the early twentieth century. Discussing emotional and psychological analysis of music, the author argues that modern music should be taken as music and nothing else, intelligible as music alone. He argues that music must be recognized as an art and intellectual faculties must be applied to understand it, much as one would apply oneself to learning a foreign language.

The Future of the Theatre

"A witty, mischievous book to be read with delight." Times Literary Supplement

"In a subtly satirical vein he visualizes kinds of theatres in two hundred years time." Nation

This volume traces the possible developments of the theatre, not only along mechanical lines, but upon those which playwrights, actors and psychologists might achieve given the scope.

The Future of Shakespeare

"To my disappointment I found myself in complete agreement with nearly all its author’s arguments. There is much that is vital and arresting in what he has to say." Nigel Playfair, in the Evening Standard.

Taking as the text recent productions of classical plays in modern dress, the author suggests that this is the proper way of reviving Shakespeare and other great dramatists of the past and that their successful revival in modern dress may perhaps be taken as an indication of their value.

The Nature of Opera

"He is to be congratulated." Saturday Review

Surveying the practice of operatic composers from the sixteenth century down to the early twentieth century the author combats the accepted notion that opera is a hybrid form of art, an unsatisfactory combination of music and drama. He argues that on the contrary, opera is an independent form, subject to its own peculiar laws.

The Music of the Future

"A book on music that we can read not merely once, but two or three times. Mr Turner has given us some of the finest thinking upon Beethoven that I have ever met with." Sunday Times

Today and Tomorrow Volume 24 Music and Drama includes Terpander, Or Music and the Future by E J Dent, Timotheus the Future of the Theatre by Bonamy Dobrée, Iconoclastes, Or The Future of Shakespeare ny Hubert Griffith, Eurydice Or The Nature of Opera by Dyneley Hussey and Orpheus, Or The Music of the Future by W J Turner. 500pp