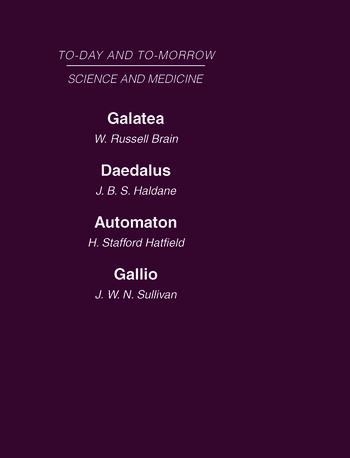 Galatea, or the Future of Darwinism

"A brilliant exposition…of the evolutionary hypothesis." The Guardian

This non-technical but closely-reasoned book is a challenge to the orthodox teaching on evolution known as Neo-Darwinism. The author claims that although Neo-Darwinian theories can possibly account for the evolution of forms, they are quite inadequate to explain the evolution of functions.

Daedalus or Science and the Future

"The essay is brilliant. Sparkling with wit and bristling with challenges." British Medical Journal

This volume examines the future of scientific research from religious, philosophical social and economic standpoints.

Automaton, or the Future of Mechanical Man

At the time of original publication mankind’s chief inventions had been extensions of his senses or limbs. This work prophesies the dawn of an era in which substitutes will gradually be found even for the human brain.

Gallio or the Tyranny of Science

"So packed with ideas it is not possible to give any adequate résumé of its contents." Times Literary Supplement

An attack on the values which science is so successfully imposing upon civilization.