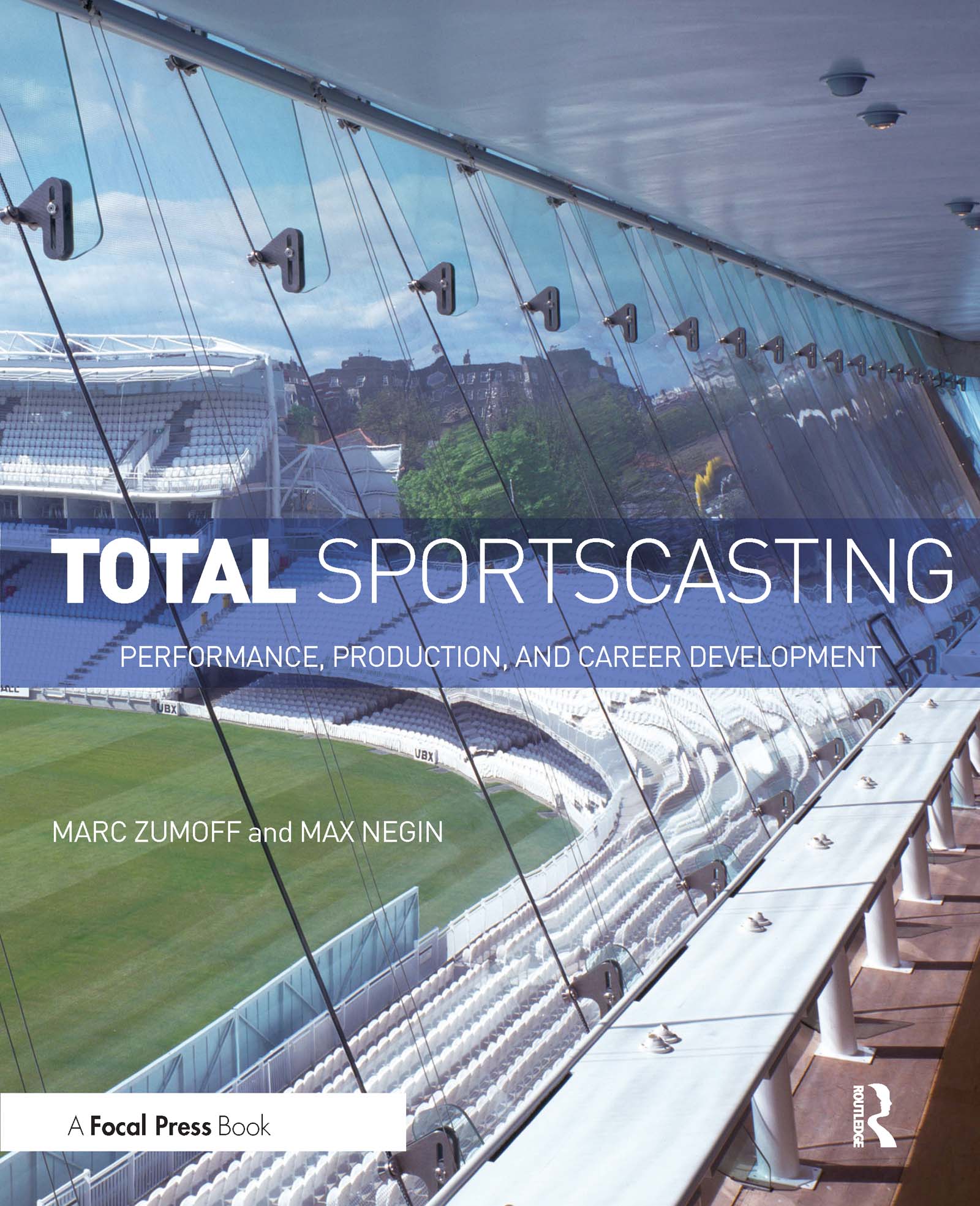 Whether you want to be in front of the camera, on the microphone, or behind the scenes, Total Sportscasting gives you the skills you’ll need to become successful in this dynamic industry. This book covers everything from performance and production techniques to all aspects of sportscasting, good broadcast writing techniques, and how best to forge lasting relationships with team personnel. It also delves into the unique issues facing women sportscasters. And when it comes to breaking into the business, Total Sportscasting devotes entire chapters to career development and demo reel production. For important perspective, we’ve also included chapters on the history of sportscasting and attempts to glimpse into its future.

is packed with a variety of features for both learning and instructing:

"The gap between the theoretical and the practical in sports television can be vast. Total Sportscasting bridges that gap with tremendous insights and real-life experiences from some of the industry's most important decision and opinion makers. Authors Marc Zumoff and Max Negin present a deep and practical understanding of this fascinating business in a unique and original presentation." –Jon Slobotkin, Vice President and Executive Producer/Live Events, NBC Sports Regional Networks

"This is the book that sportcasting professors have been waiting for. Total Sportscasting offers students a thorough look at the industry, from both the performance side as well as the business side. It's a must-read for students who are considering a career in sports broadcasting."–Tammy Trujillo, Mt. San Antonio College, KSAK 90.1 FM, USA ; News Host, 89.3 FM KPCC

"If you are searching for a text that explains the ins and outs—the hows and whys—of televised sport, here is the most comprehensive book you will find. Finally, a text that provides the student with the important aspects of sports television." –Rodger Smith, George Mason University, USA

"Readers will benefit from the practical advice, clear writing and 'real world' insights found in every chapter. Highly recommended for adoption consideration as a primary text for courses in sports announcing, Total Sportscasting would also be an excellent supplementary choice for courses in sports media, broadcast performance and television programming." – Philip A. Thompsen, West Chester University, USA

Chapter 9: Social Media and the Web

Chapter 15: Directing and the Flow of the Crew

Chapter 19: The Future of Sportscasting

Marc Zumoff, a 38-year broadcasting veteran, is in his 20th season as the television play-by-play voice of the NBA’s Philadelphia 76ers. He has had extensive experience in anchoring, reporting and production in news and sports broadcasting as well as play-by-play. He is a 15-time regional Emmy winner. He is a graduate of Temple University with a bachelor’s degree in Radio-TV-Film. He is a member of the Radio TV Digital News Director’s Association. His broadcast coaching business is featured at marczumoff.com where he blogs and tweets frequently on issues associated with television and radio performance.

Max Negin is an editor, tape operator, producer and director with over 12 years of professional production experience. Max is an Assistant Professor of Communications at Elon University. He has won national Emmy Awards in the category Outstanding Technical Team, Studio as part of NBC’s coverage of the Olympic Games in 2010 (Vancouver) and 2012 (London). He has also won two regional Emmys for writing and editing. Negin has worked for a variety of broadcast outlets including NBC, HBO Sports, FOX, ESPN, and a host of regional cable outlets, professional sports teams and colleges. He spent two seasons as an associate producer for the Philadelphia 76ers as well as the video coordinator for three seasons for the Phillies Television Network.