Toward Mutual Recognition
Relational Psychoanalysis and the Christian Narrative 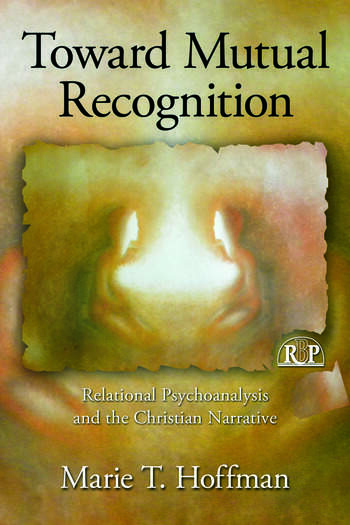 Toward Mutual Recognition: Relational Psychoanalysis and the Christian Narrative

Ever since its nascent days, psychoanalysis has enjoyed an uneasy coexistence with religion. However, in recent decades, many analysts have been more interested in the healing potential of both psychoanalytic and religious experience and have explored how their respective narrative underpinnings may be remarkably similar.

In Toward Mutual Recognition, Marie T. Hoffman takes just such an approach. Coming from a Christian perspective, she suggests that the current relational turn in psychoanalysis has been influenced by numerous theorists - analysts and philosophers alike - who were themselves shaped by an embedded Christian narrative. As a result, the redemptive concepts of incarnation, crucifixion, and resurrection - central to the tenets of Christianity - can be traced to relational theories, emerging analogously in the transformative process of mutual recognition in the concepts of identification, surrender, and gratitude, a trilogy which she develops as forming the "path of recognition."  Each movement on this path of recognition is given thought-provoking, in-depth attention. Chapters dedicated to theoretical perspectives utilize the thinking of Benjamin, Hegel, and Ricoeur. In her historical perspectives, she explores the personal and professional histories of analysts such as Sullivan, Fairbairn, Winnicott, Erikson, Kohut, and Ferenczi, among others, who were influenced by the Christian narrative. Uniting it all together is the clinical perspective offered in the compelling extended case history of Mandy, a young lady whose treatment embodies and exemplifies each of the steps along the path of growth in both the psychoanalytic and Christian senses.

Throughout, a relational sensibility is deployed as a cooperative counterpart to the Christian narrative, working both as a consilient dialogue and a vehicle for further integrative exploration. As a result, the specter of psychoanalysis and religion as mutually exclusive gives way to the hope and redemption offered by their mutual recognition.

Marie T. Hoffman, Ph.D., clinical psychologist and psychoanalyst, is a graduate of New York University's Postdoctoral Program in Psychotherapy and Psychoanalysis. The 2006 Stephen Mitchell Scholar, she has been a visiting professor at Rosemead School of Psychology and Fuller Theological Seminary and a visiting lecturer at Wheaton Graduate School. In addition, she is co-director (with her husband) of the Brookhaven Center for Counseling and Development in Allentown, PA, and is founder and co-director of the Society for Exploration of Psychoanalytic Therapies and Theology (SEPTT).

"Toward Mutual Recognition is a remarkable work of cross-fertilization. Drawing on her intimate knowledge of both traditions, Marie Hoffman interprets contemporary psychoanalytic theory to her Christian colleagues and conveys the core tenets of Christian theology to the psychoanalytic community. In the process, she explores conceptual and historical links between the two discourses that may surprise readers in both groups. The writing is both scholarly and accessible as Hoffman moves back and forth between explicating broad intellectual issues and illustrating their applicability via a frank, detailed account of her devoted work with a severely traumatized woman. The author's contagious passion, compassion, and erudition make this a must-have text for anyone interested in the history of psychoanalytic thought or in the timeless concerns of the major religious traditions. And it will inspire and console ordinary therapists, who inevitably bear witness, hour after hour, to both the fragility and the resilience of the human soul." - Nancy McWilliams, Rutgers University Graduate School of Applied and Professional Psychology, New York, USA

"This moving and challenging book, filled with rich material both scholarly and clinical, will inspire many to rethink the relationship between religious faith and psychoanalysis. Hoffman has created a fascinating, innovative dialogue, using the idea of recognition to build a bridge between two dissonant traditions - relational psychoanalysis and Christian theology. Focusing on intersubjectivity, she finds a conjunction between these two transformational practices while squarely facing their differences. She traces a path that is at once redemptive and unflinchingly honest about the complexities of psychodynamic work, both personal and theoretical. Illustrated by the case of Mandy, a courageous young woman who has suffered scarcely imaginable horrors, Hoffman powerfully supports her case for a relational psychoanalytic approach to trauma inspired by faith." - Jessica Benjamin, Clinical Associate Professor, NYU Postdoctoral Program in Psychotherapy and Psychoanalysis, New York, USA

"Not since the late Randall Sorenson's Minding Spirituality have we seen a book with such combined theological and clinical depth, theoretical and practical acumen, and scholarly and historical analysis. With incredible psychoanalytic, spiritual, and postmodern sensitivity, Hoffman narrates her work with Mandy, navigating between holding and idolatry, mothering and fathering, transparency and reserve. Building on the relational psychoanalytic insights of Benjamin and Aron, and the philosophical/theological contributions of Hegel and Ricoeur, Hoffman pairs three phases in psychoanalytic treatment (identification, surrender, and gratitude) with three classic theological themes (incarnation, crucifixion, and resurrection). In each of the three sections of the book she avoids any simplistic identification of theology with psychoanalysis but prefers to let them speak to each other; each member in the pair is an analogue for the other. However, as she incorporates the different cadences, no longer are theology and clinical practice simply correlative, but a creative, symphonic synthesis has taken place. In the future, those who do not ponder this book risk the danger of facile integration of faith and clinical practice." - Alvin Dueck, Evelyn and Frank Freed Professor of the Integration of Psychology and Theology, Fuller Theological Seminary, USA

"Hoffman enlightens the proposals of great European thinkers, such as Kierkegaard, as well as those of British and American psychoanalysts, such as Ian Suttie, Izette de Forest, and Clara Thompson. She shows newly discovered connections between these people, who paved the way for a possible renewal of psychoanalytic thinking and practice, stressing the importance of relationship, intersubjectivity, love, and dedication. In addition, a thrilling chapter on Sandor Ferenczi, based on thorough research, opens a new pathway of innovative vistas for present and future work." - Andre Haynal, University of Geneva, Switzerland

"Marie Hoffman draws impressively on philosophical and theological resources in the tradition of Hegel as she develops an interdisciplinary theory of mutual recognition. By applying the theory to her clinical work, and to one case in particular, she demonstrates through careful analysis that recognition is a profound resource for human social existence and mental health in general." - Peter C. Hodgson, Charles G. Finney Professor of Theology, Emeritus, Vanderbilt University Divinity School, Tenessee, USA

"Hoffman builds a psychoanalytic model for applied patient treatment on the formulation of Hegel's brilliant notion of incarnation, crucifixion, and resurrection as it is mediated into a psychoanalytic world view, especially by Pfister, Fairbairn, Winnicott, Klein, and Ferenczi. She translates this world view through case presentations into an applied treatment model. This is a rigorously crafted scientific work on the interface of psychology and spirituality. It moves with great clarity and enticement across the frontiers of research and breaks fertile new ground for our field. It is an urgently necessary work for religious and secular scholars alike." - Dr. J. Harold Ellens, Executive Director, Emeritus, CAPS, and Founding Editor, Journal of Psychology and Christianity

"With this profoundly integrative book, Marie Hoffman has emerged on the analytic scene in a groundbreaking way. Her deep passion for and thorough culling and intertwining of historical, theoretical, and clinical analytic concepts with a broad array of philosophical and theological ideas is remarkable. For those hoping to better understand the development of analytic perspectives as they have been influenced by theorists' spiritual genealogies, Hoffman offers a more thorough text than has ever been written thus far. For those wishing for complex yet personal clinical training in how a relational psychoanalytic approach might sensitively and masterfully combine an understanding of both spiritual and psychological dynamics, she ventures to unfold an in-depth case study of her own. For those wishing to understand the march of psychoanalytic theory toward a more relational perspective, between patient and analyst as well as with God, Hoffman leads us on that path, uncovering gems of wisdom from various theorists and offering powerful new metaphors of her own. This is a book I highly recommend to any serious student of psychology, psychoanalysis, theology, and philosophy; I hope it will become a primary text in graduate schools within each of these disciplines, helping to encourage dialogue between them for years to come." - Beth Fletcher Brokaw, Rosemead School of Psychology, USA

"When faith meets scholarship, creativity and insight follow in Toward Mutual Recognition. Marie Hoffman brings depth and richness to her perspectives from the fields of relational psychoanalysis and Christian faith, thereby creating a rare and profound work of integration. Surprisingly, she begins by exposing and embracing the elements of Freud's Judaic faith tradition on which, she asserts, psychoanalytic thought and process are grounded. She continues, then, on an exuberant and multifaceted journey to make implicit redemptive metaphors explicit. She traces the historical influence of Judeo-Christian thought in the relational stance of Ferenczi and the impact of Christian tradition in Winnicott's revelation of incarnational processes in both development and treatment, as well as provides a stunning and serious examination of the philosophical resonance between Hegel's phenomenology and the analytic work of Benjamin and others in the relational school, as illuminated through Ricoeur's hermeneutic of faith. She uncovers a weave between disciplines that has largely gone unrecognized, and that illuminates the process of healing in both disciplines. Threaded throughout the academic story is a case of searing pain and clinical tenderness in which the analytic work of identification, surrender, and gratitude echoes in themes of incarnation, crucifixion, and resurrection. This is a formidable work of a passionate and articulate woman which will impact the field for years to come." - John D. Carter, Lecturer, California Baptist University, USA

"For too long, psychoanalytic writers have mostly excluded religious and spiritual concerns from their field of study. Marie Hoffman has done much to correct that oversight in this deeply felt, eloquent, and scholarly work describing the parallels between the Christian narrative and the intersubjective aspects of relational psychoanalysis." - Peter Shabad, Associate Professor of Clinical Psychology, Northwestern University Medical School, and author, Despair and the Return of Hope

"This project's elegance comes from her mapping of the three kairotic (existential, not chronological time) moments of incarnation, crucifixion, and resurrection onto Jessica Benjamin's theory of mutual recognition, centrally located within contemporary relational psychoanalysis....I believe that it begins an important conversation in contemporary psychoanalysis and that we will all be in Hoffman's debt." - Donna M. Orange, PhD, PsyD, Institute for the Psychoanalytic Study of Subjectivity, New York