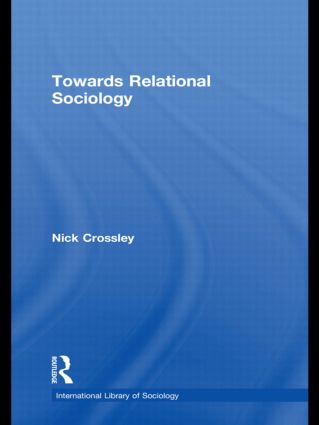 Towards Relational Sociology argues that social worlds comprise networks of interaction and relations. Crossley asserts that relations are lived trajectories of iterated interaction, built up through a history of interaction, but also entailing anticipation of future interaction. In addition, he demonstrates how networks comprise multiple dyadic relations which are mutually transformed through their combination. On this conceptual basis he builds a relational foundation for sociology.

Over the course of the book, three central sociological dichotomies are addressed - individualism/holism, structure/agency and micro/macro – and utilised as a foil against which to construct the case for relational sociology. Through this, Crossley is able to argue that neither individuals nor ‘wholes’ - in the traditional sociological sense - should take precedence in sociology. Rather sociologists should focus upon evolving and dynamic networks of interaction and relations.

The book covers many of the key concepts and concerns of contemporary sociology, including identity, power, exchange and meaning. As such it is an invaluable reference tool for postgraduate students and researchers alike.

'…there is no doubt that N. Crossley has made a significant contribution to relational sociology. This is exactly the kind of work we need at this point, if we want to move it forward. Any social scientist interested in relational sociology should read and criticize this book carefully.'

-Francois Depelteau, Laurentian University in the Canadian Journal of Sociology vol 36 no 4

'…elements of the social cosmos underplayed…by Bourdieu are fruitfully brought to the fore. Crossley’s intriguing rereading of Foucault through network lenses, for example, offers a potentially fertile means of investigating the circuits of symbolic power.'

-Will Atkinson, University of Bristol in Sociology, vol 46 no 1

Acknowledgements 1. Introduction 2. Individualism, Holism and Beyond 3. Mapping the Territory 4. From Strategy to Empathy 5. Mind, Meaning and Intersubjectivity 6. I, Me and the Other 7. Exchange, Sociability and Power 8. Structure, Agency and Social Worlds 9. Networks, Conventions and Resources: The Structure(s) of Social Worlds Bibliography Index

Nick Crossley is a Professor of Sociology at the University of Manchester, UK. He has published on a wide range of issues in sociology, most recently on social network analysis.