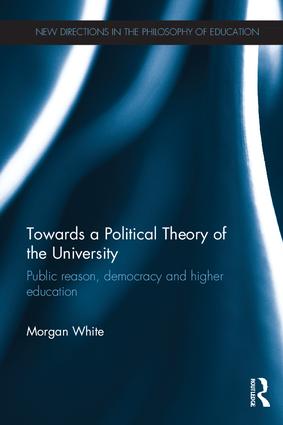 Towards a Political Theory of the University

Towards a Political Theory of the University argues that state and market forces threaten to diminish the legitimacy, authority and fundamental purposes of higher education systems. The political role of higher education has been insufficiently addressed by academics in recent decades.By applying Habermas’ theory of communicative action, this book seeks to reconnect educational and political theory and provide an analysis of the university which complements the recent focus on the intersections between political philosophy and legal theory.

In this book, White argues that there is considerable overlap between crises in democracy and in universities. Yet while crises in democracy are often attributed to the inability of political institutions to adapt to the pace of social and cultural change, this diagnosis wilfully ignores the effects of privatisation on public institutions. Under present political conditions, the university is regarded in instrumental and economic terms, which not only diminishes its functions of developing and sustaining culture but also removes its democratic capabilities. This book explores these issues in depth and presents some of the practical problems associated with turning an independent higher education system into a state-dominated and then, subsequently, marketised system.

This book bridges political and educational theory in an original and comprehensive way and makes an important contribution to the debate over the role of the university in a democracy. As such, it will appeal to researchers, academics and postgraduate students in the fields of the philosophy of education, higher education, and political and educational theory. With its implications for policy and practice, it will also be of interest to policy makers.

‘Do universities have a public purpose beyond contributing to economic growth, new technologies, and the job skills of graduates? Could this purpose lie in supporting democracy not only prosperity, in nurturing understanding not only technical competence, and in preparing citizens not just workers? Morgan White doesn’t just offer his answers to these questions but helps all of us think better about them – and about what democratic societies will lose if universities are transformed beyond recognition.’

‘Sociologically informed, philosophically insightful, and politically pertinent, Towards a Political Theory of the University provides a masterful critique of the problems and prospects of the university today. Morgan White brings a penetrating reading of Jürgen Habermas’ philosophy to the understanding of the contemporary university, showing how the erosion of communicative reason and the colonization of the lifeworld have affected the institution in ways that are deeply corrosive for any wider culture of deliberative democracy. This is a book that should be read by anyone concerned with the future of higher education and the political culture it sustains.’

‘Morgan White places the university at the heart of democratic politics. Against the popularist rhetoric of both the political left and right, he affirms the prime importance of the university as a space of public reason. Without such civic spaces, he argues, democracy is not only impoverished but seriously at risk. Towards a Political Theory of the University should be read by academics, policy makers, politicians and all those with a commitment to open debate and inquiry.’

Introduction 1. The University and the Public Sphere 2. Higher Education and Economies of Worth 3. The Role of the University in a Democracy 4. Academic Authority, Trust, and Reliance 5. Higher Education and Citizenship 6. The Ivory Tower and Public Life 7. The Corruption of Democracy and Education 8. Implications for Policy and Practice 9. Towards a Modern Democratic Society 10. Concluding remarks: Communicative Rationality and the Cultural Impoverishment of the University

Morgan White was a tutor in Philosophy of Education at University of Cambridge, UK and a lecturer in Education at Liverpool Hope University, UK. He received his PhD from University of Manchester, UK, and has a particular interest in the public role of higher education, social justice, deliberative democracy and tensions with instrumental learning.