Trade Unions and Arab Revolutions
Challenging the Regime in Egypt 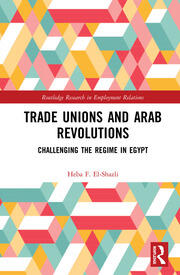 Trade Unions and Arab Revolutions: Challenging the Regime in Egypt

“We started the 2011 revolution and the rest of Egypt followed,” say Egyptian workers with strong conviction and passion. Egyptian independent workers’ continuous claims of contention and protest repertoires were one of several main factors leading to the January  25, 2011, uprising. After thirty-two years of a Mubarak-led authoritarian regime, massive protests began in January 2011 and forced President Mubarak to step down from his position on February 11, 2011. So, how did Egyptian workers challenge the regime and how did they become one of the factors leading to the January  2011 uprising? These workers were organized into loose networks of different independent groups that had been protesting for a decade and longer prior to January 2011. These regular protests for over a decade before 2011 challenged the Egyptian authoritarian regime.

This book examines the combative role of Egyptian independent workers’ formal and informal organizations as a contentious social movement to challenge the regime. It will examine the evolving role of workers as socio-economic actors and then as political actors in very political transitions. Social movement theory (SMT) and its mechanisms and social movement unionism (SMU) will be the lenses through which this research will be presented. The methodology used will be the comparative case studies of two different movements where workers who advocated for their rights for a decade prior to January 2011 experienced signiﬁcantly differing outcomes. One case study showcases the municipal real estate tax collection workers who were able to establish a successful social movement and then create an independent trade union. The second case study examines an inﬂuential group of garment and textile workers, who also developed an effective social movement, yet they were not able to take it to the next step to establish an independent union. I will explore within this research a second question: why one group of workers was able to establish an independent union while the other arguably more inﬂuential group of workers, the garment and textile workers, was not able to do so. This had an impact on the overall inﬂuence they were able to exercise over the regime in addition to their effectiveness as a social movement for change.

– An Elusive Victory: how Egyptian workers challenged the regime, and the rise of the protest movement

Part I – A brief overview of Egyptian workers’ revolts and history

Chapter 2. An Overview of The Egyptian Labor Movement’s History (Pre- and Post-1952) and the Shaping of the Current Labor Movement: the nature of political conflict, contenting elite factions and the institutional basis of political power

Chapter 4. Second Case Study - The Garment & Textile workers at the Misr Company for Spinning and Weaving in El-Mahalla al-Kubra

Chapter 5. Other Workers’ Protests and how their repertoire mirrored the protests of larger unions and worker groups

Chapter 6. The Cultural Framing: Socio-economic, political and cultural changes in Egypt leading up to the January 2011 Uprising

Chapter 7. The Hope for a Democratic Transition: Post January 2011 Uprising and the Role of the Independent Labor Movement Leading to the May 2012 Elections and Beyond

Chapter 8. Concluding remarks and Epilogue: Political, Economic and Social Developments from 2012 to 2018

: Examples of Other Significant Protests by Egyptian Workers

Heba F. El-Shazli is an Assistant Professor at George Mason University’s Schar School of Policy and Government, where she teaches undergraduate and graduate courses on International Relations Theory; Politics, Government and Society of the Middle East; Israeli-Palestinian Politics; and Islam and Politics. She is an affiliate faculty to the Ali Vural Ak Center for Global Islamic Studies (AVACGIS) at George Mason University. She is also an Adjunct Faculty at Georgetown University’s Master’s Degree Program at the Center for Democracy and Civil Society.

"The Arab Spring was a great and lost opportunity to bring democracy and secular reform to the Arab world. Heba F. El-Shazli shows how workers and their organizations were central to the movement’s strength; and how defeat was a blow to campaigns to bring economic as well as political justice to working people in Egypt and throughout the world." –Gerald Friedman, University of Massachusetts, USA