Trade Unions in the Green Economy
Working for the Environment 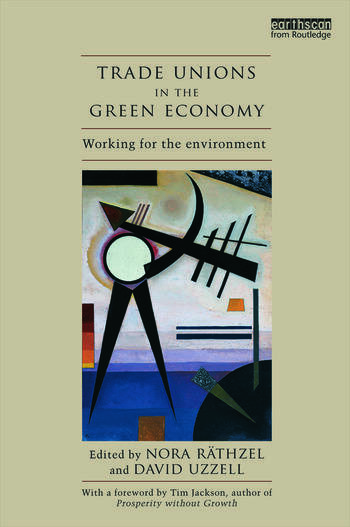 Trade Unions in the Green Economy: Working for the Environment

Combating climate change will increasingly impact on production industries and the workers they employ as production changes and consumption is targeted. Yet research has largely ignored labour and its responses. This book brings together sociologists, psychologists, political scientists, historians, economists, and representatives from international and local unions based in Australia, Brazil, South Africa, Taiwan, Spain, Sweden, the UK and the USA. Together they open up a new area of research: Environmental Labour Studies.

The authors ask what kind of environmental policies are unions in different countries and sectors developing. How do they aim to reconcile the protection of jobs with the protection of the environment? What are the forms of cooperation developing between trade unions and environmental movements, especially the so-called Red-Green alliances? Under what conditions are unions striving to create climate change policies that transcend the economic system? Where are they trying to find solutions that they see as possible within the present socio-economic conditions? What are the theoretical and practical implications of trade unions’ "Just Transition", and the problems and perspectives of "Green Jobs"? The authors also explore how food workers’ rights would contribute to low carbon agriculture, the role workers’ identities play in union climate change policies, and the difficulties of creating solidarity between unions across the global North and South.

Nora Räthzel is Professor of Sociology at the University of Umeå, Sweden.

David Uzzell is Professor of Environmental Psychology at the University of Surrey, UK.

Tim Jackson is Professor of Sustainable Development at the University of Surrey and author of the bestselling Prosperity without Growth.

@quote:'This book itself is evidence that the outmoded dialectics of a divide between labour and nature have had their day. Drawing together an impressive collection of essays from academics, trade-unionists and environmentalists, Uzzell and Räthzel set out to build a vision of transformation that integrates the urgency of ecological limits with the paramount importance of social justice.' – Tim Jackson, University of Surrey, UK and author of Prosperity Without Growth

'In this ground breaking book, Räthzel, Uzzell and colleagues confront the unthinkable: our current global economy is unable to deliver a sustainable environment or employment. At a time of unprecedented global youth unemployment these authors also offer a fierce challenge to the complacent hope that green growth is an answer. Instead, using case-studies and nuanced argument, these writers explain how a more systemic transformation might be achieved. This fascinating book not only unites environment and labour studies, it renews Rosa Luxemburg’s vision of ‘revolutionary reformism’ for a new generation.' – Bronwyn Hayward, University of Canterbury, New Zealand

'Räthzel and Uzzell present a very welcome and long overdue examination of the relations between the labour and environmental movements, one that goes far beyond the tensions they sometimes experience, toward explicating their complex and often sympathetic aspirations and relations. This is the exciting harbinger of a new field of enquiry.' – Robert Gifford, University of Victoria, Canada

'An international compilation the time for which is clearly ripe! Recognising the often hostile historical relationship between labour organisations and environmental movements, the book reveals a significant but complex greening of union organisations, as well as significant tensions amongst such requiring theoretical and political solution.' – Peter Waterman, InterfaceJournal, Netherlands

'A passionate, timely and path-breaking book! Trade Unions in the Green Economy maps the historic divide between labour and environment and examines international, national and local labour strategies that make environmental responsibility a union issue. Integrating elegant scholarship and activism, Nora Räthzel and David Uzzell bring labour back in to the struggle to slow global warming, arguing that it can transform unions, while it opens a new space for action and engaged scholarship.' – Carla Lipsig-Mummé, York University, Canada

'For too long the labour movement has been considered as being on the sidelines of the environmental discourse. This book turns this view on its head. This primer shows how the labour movements from the north to the south are reclaiming environmental degradation as a union issue. ' – Dinga Sikwebu and Woody Aroun, National Union of Metalworkers of South Africa (NUMSA), South Africa

'Articles in this volume bridge the conceptual divide between green economy and employment. It is good as text as well as reference material. Useful for positioning  actions and directions for labour unions in new development paradigm, especially in  developing countries- the emerging economic growth centres of the world. ' – Joyashree Roy, Professor of Economics, Jadavpur University, India