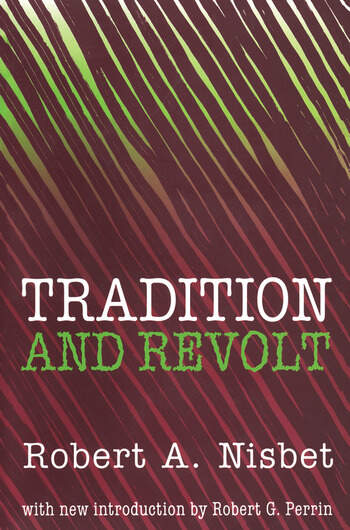 This classic volume deals with a crucial contemporary social issue: the conflict between traditionalism and modernism. Nisbet considers such subjects as power, community, culture, and the university. He deals directly with the values of authority, tradition, hierarchy, and community on the one hand, and individualism, secularism, and revolt on the other. Nisbet's underlying argument is that there is a close historical relationship between the distribution of power in democratic society and the displacement of social class, kinship, neighborhood, and the church. The book challenges concerned Americans to understand and address the basic conflicts confronting contemporary society.

In his introduction, Robert G. Perrin shows how the chapters in this volume reflect Nisbet's sociological vision exemplified throughout his career. Perrin notes that when these writings first appeared, they stimulated and informed debate on a broad range of topics such as value conflict, leadership, community, sociology, social class, technology, and the university. They also foreshadowed works yet to come in Nisbet's long and distinguished intellectual journey.

Originally published in 1968, Tradition and Revolt was greeted with thoughtful reviews in leading sociology journals. Writing in the American Journal of Sociology, Joseph R. Gusfield called it "so welcome a publication," one containing "remarkable contributions to the analysis of modern society." Nisbet's vision of Western social life as shaped by the struggle between the dialectically opposed values of tradition and modernity illuminates contemporary issues. Tradition and Revolt will be of particular value to sociologists, cultural historians, and political theorists.

Robert A. Nisbet (1913-1996) was Albert Schweitzer Professor Emeritus of the Humanities at Columbia University, and before that, dean of the School of Humanities at the University of California at Riverside. Among his many books are History of the Idea of Progress, The Sociological Tradition, The Degradation of the Academic Dogma, and Teachers and Scholars, all available from Transaction.

Robert G. Perrin is professor of sociology and director of graduate studies at the University of Tennessee.