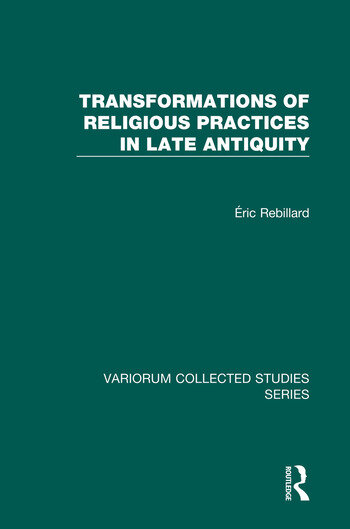 The eighteen papers collected in this volume - fifteen of which are published in English for the first time - explore the transformations of religious practices between the third and the fifth centuries in the Western part of the Roman Empire. They share an approach that privileges the study of processes and interactions and does not take for granted the categories and roles traditionally ascribed to social actors. A first group of papers focuses on the sermons and letters of Augustine of Hippo. These texts are precious evidence for balancing the clerical perspective that characterizes most of our sources and can thus shed a different light on the problem of Christianization. The second group collects papers that propose to shift attention from the construction of heresies to that of orthodoxy through the case-study of the controversy of Augustine against Pelagius and Julian of Eclanum. A last group present studies that look at the complex relation between burial and religion, with a particular focus on the role played by the church in the organization of the burial of Christians in Late Antiquity.

Contents: Foreword; Part I Pastoral Care and Conversion in the Age of Augustine: The ’conversion’ of the Empire according to Peter Brown; Interaction between the preacher and his audience: the case-study of Augustine’s preaching on death; Preaching in a local context: Augustine on the fear of death; Catechumens and the delay of baptism in the preaching of Augustine; Augustine and the cult of statues; The Christian mob and the destruction of pagan statues: the case of North Africa in the age of Augustine; Augustine and the epistolary rituals of the social and cultural elite of his time: a processual analysis of the relations between bishop and city in late Antiquity; ’To live with the heathen, but not die with them’: the issue of commensality between Christians and non-Christians in the first five centuries; The sacred and Christian identity in the time of Augustine. Part II The Construction of Orthodoxy and the Pelagian Controversy: Deviance theory and orthodoxy: the case of the Pelagian controversy on grace; A new style of argument in Christian polemic: Augustine and the use of patristic citations; Dogma populare: popular belief in the controversy between Augustine and Julian of Eclanum; Quasi funambuli: Cassian and the Pelagian controversy on perfection. Part III The Care of the Dead in Late Antiquity: Church and burial in late antiquity (Latin Christianity, 3rd to 6th centuries CE); Koimhthrion and coemeterium: tomb, martyr tomb, necropolis; Were the Carthaginian areae Christian cemeteries or burial enclosures for Christians?; The Church of Rome and the development of the catacombs: on the origin of Christian cemeteries; The burial of the poor in the Roman Empire and its evolution in late Antiquity; Index.

Ã‰ric Rebillard is Professor of Classics and History at Cornell University, USA.