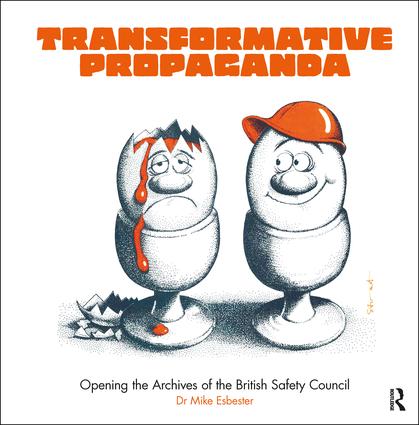 Opening the Archives of the British Safety Council, 1st Edition

What do seat belts, life jackets and anti-jack knife technology have in common? They were all the subjects of campaigns run by the British Safety Council since its inception in 1957. James Tye, its charismatic founder and leader for nearly 40 years, created the British Safety Council to bring about a transformation in how Great Britain viewed safety and health. In 1957, hundreds, if not thousands, of workers were killed in accidents and James marshalled every conceivable technique to save lives, including PR stunts, training, lobbying for better laws and, crucially, what he called ‘propaganda’, in the form of posters and other communication tools.

In 2014, a long-lost collection of posters, papers and letters were found gathering dust in a warehouse. The British Safety Council, wanting to mark its 60-year history and its role in reducing deaths at work, decided to preserve the collection and commissioned historian Mike Esbester to trace the history of health and safety in Britain from the late 1960s through the posters and photographs of the time.

Transformative Propaganda: Opening the Archives of the British Safety Council

offers a fascinating and vivid insight into the social and political realities of the 1960s, 1970s and 1980s through a wealth of historical documents, press cuttings, correspondence, photographs and posters. It offers a truly extraordinary window onto the evolution of health and safety within the UK and richly deserves a place on the bookshelf of every safety professional.

Dr Mike Esbester is Senior Lecturer in History at the University of Portsmouth. His research explores the history of safety, risks and accident prevention in modern Britain, including a focus on why persuasive techniques (such as education) have been used, what messages they have conveyed, what they say about British society and what people thought of them. He is particularly interested in the role of non-governmental organisations like the British Safety Council, with whom he has been working for a number of years, including the initial enquiries that led to the rediscovery of the British Safety Council’s archive upon which this book is based.