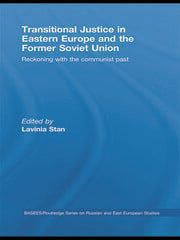 Transitional Justice in Eastern Europe and the former Soviet Union: Reckoning with the communist past

During the last two decades, the countries of Eastern Europe and the former Soviet Union have attempted to address the numerous human rights abuses that characterized the decades of communist rule. This book examines the main processes of transitional justice that permitted societies in those countries to come to terms with their recent past. It explores lustration, the banning of communist officials and secret political police officers and informers from post-communist politic, ordinary citizens’ access to the remaining archives compiled on them by the communist secret police, as well as trials and court proceedings launched against former communist officials and secret agents for their human rights trespasses. Individual chapters explore the progress of transitional justice in Germany, the Czech Republic, Slovakia, Poland, Hungary, Romania, Bulgaria, Albania, Slovenia and the successor states of the former Soviet Union. The chapters explain why different countries have employed different models to come to terms with their communist past; assess each country’s relative successes and failures; and probe the efficacy of country-specific legislation to attain the transitional justice goals for which it was developed. The book draws together the country cases into a comprehensive comparative analysis of the determinants of post-communist transitional justice, that will be relevant not only to scholars of post-communist transition, but also to anyone interested in transitional justice in other contexts.

Lavinia Stan teaches at Concordia University, Montreal. A political scientist working on transitional justice, religion and politics, and post-communist democratization, she is the author of Leaders and Laggards (2003), co-author of Religion and Politics in Post-Communist Romania (2007), and editor of Romania in Transition (1997).

"’Transitional justice’ is a phrase that embraces a wide variety of practices in new democracies, some of them more transitional than others, some not always entirely just. This thorough comparative assessment of the experience so far in all the countries of the former Soviet bloc examines the "non-cases" as well as the more exemplary processes, and it takes into account not only policy intentions but actual difference in implementation (right up to the point when most of the countries in question joined the European Union). What emerges is a quite variegated picture, with pre-transition historical experiences and the specific correlation of forces between communist rulers and opposition challengers providing much of the explanation for the observed divergences. This is an important contribution to post-communist studies and to the comparative analysis of democratization in general. Experience from elsewhere suggests that unresolved conflicts in this area can continue to fester and may impede the stabilization of the democratic system despite generational change."

"Coming to terms with unpleasant historical episodes is never easy for any society. The process has been especially difficult in the former Communist countries, most of which have failed to hold anyone accountable for the atrocious crimes of the Communist era. In some states, especially Russia, Belarus, and the Central Asian republics, officials who spearheaded the repression of dissidents during the Soviet era are back in high posts. In Central and Southeastern Europe, too, efforts to seek redress for the crimes perpetrated by Communist regimes have often been deeply flawed. The many obstacles to a full and fair reckoning with the Communist past are thoughtfully analyzed in this valuable collection of essays by distinguished experts. Lavinia Stan, the editor and lead author of the book, has assembled an excellent group of contributors. The comprehensive scope of the volume makes it a true comparative work. This book provides the most thorough and analytically sophisticated treatment yet available of this crucial topic."

"The question how countries deal with a difficult past is always intriguing but particularly so when several countries concurrently address the issue and the policies and the policy outcomes show significant variance. Such is the scenario in the former communist bloc in Eastern Europe and the Soviet Union. The in-depth country studies in this book provide the reader with up-to-date information and sound analysis while the analytical framework locates them in the broader body of literature and offers insightful cross-national comparisons. Timely and thought-provoking, this book is indispensable reading for scholars of transitional justice and democratization."

"An outstanding, brilliant book that helps us to understand developments in post-1989 Eastern Europe. Lustration, the opening of secret police files and trials of communist perpetrators have marked political and intellectual debates in these new democracies, and constituted pivotal efforts to come to terms with the legacy of the communist dictatorship. The volume examines in detail the region's efforts to reckon with the recent past, and the theoretical explanations for country differences in the scope and pace of transitional justice. A "must read" not only for Eastern Europeans, but also for students of transition to democracy in other parts of the world and other historical periods."

"I met Professor Stan at a conference on Dealing with the Past in East Central Europe that I organized here at Columbia in December 2007, and was impressed with Lavinia’s comprehensive, comparative grasp of transitional justice processes in post-communist East and Central Europe.  She subsequently sent me parts of her manuscript and I can see that my impression was justified. Lavinia and her colleagues have produced a very good survey and explain why individual countries employed different models of coming to terms with their recent past.  I specialize in Poland and know the literature on lustration – Lavinia’s chapter is a concise analysis that would profit anyone interested in these issues.  I will eagerly await publication of this volume, purchase it, and tell my colleagues and students that an English-language text has been published that reveals why dealing with the past in our part of the world is so complicated."

"In this pioneering new work, Lavinia Stan and her contributors have produced a theoretically coherent and empirically well-documented book that will be required reading in the field of post-communist transition in East-Central Europe and the Former Soviet Union. Rooted in an impressive understanding of transitional justice processes in the region, Stan’s volume provides concise narrative about changes that occurred after the access to the communist secret files was partially granted to the citizens of former communist countries. This book will be appreciated by laymen and experts alike."

"Why do some countries reckon with past repression by opening up the files of secret police, barring from office participants in the repressive regime, and prosecuting human rights abuses, while others, with similar abuses, do little to face their past? Tracing developments from 1989 to 2007, Transitional Justice in Eastern Europe and the Soviet Union provides fascinating, detailed case studies and a persuasive argument linking contrasting responses to past and present political alignments and to degrees of prior experiences with democracy and political pluralism. This will be a vital resource for understanding when and where transitional justice is pursued."

Martha Minow, Harvard Law School, and author of Between Vengeance and Forgiveness

"Stan brings together a fine collection of essays that examines one of the challenges facing countries of eastern and central Europe in recent decades--how to deal with their communist past...Recommended.  General readers, graduate students, and research faculty." -- CHOICE, Sept. 2009 Vol. 47 No. 01