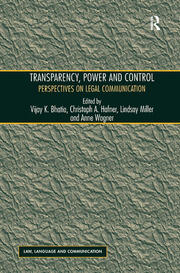 This book brings together academics and practitioners from a range of disciplines from more than twenty countries to reflect on the growing importance of transparency, power and control in our international community and how these concerns and ideas have been examined, used and interpreted in a range of national and international contexts. Contributors explore these issues from a range of overlapping concerns and perspectives, such as semiotic, sociolinguistic, psychological, philosophical, and visual in diverse socio-political, administrative, institutional, as well as legal contexts. The collection examines the ways in which 'actors' in our society - legislators, politicians, activists, and artists - have provoked public discourses to confront these issues.

Vijay Bhatia is a Visiting Professor in the Department of English. Before joining the City University of Hong Kong in 1993, he worked at the National University of Singapore (1983-1993) . He is also the founding President of the Association of LSP and Professional Communication for the Asia-Pacific Region. Some of his recent research projects include Analyzing Genre-bending in Corporate Disclosure Documents, and International Arbitration Practice: A Discourse Analytical Study, in which he leads research teams from more than 20 countries. His research interests include genre analysis of academic and professional discourses, including, legal, business, newspaper, advertising genres, ESP and Professional Communication. He has given more than 150 presentations in international conferences, including about 50 plenary and keynote papers in the last ten years. Christoph A. Hafner is an Assistant Professor in the Department of English, City University of Hong Kong. In addition to his background in applied linguistics, he is also trained as a lawyer and has taught post-graduate courses in legal writing and drafting and English for Law to both novice lawyers and students of language studies in Hong Kong. He was principal investigator on a Teaching Development Grant project to design, implement and evaluate a genre-based, online resource for the development of professional legal communication skills. He has been involved in a range of other funded projects in legal discourse and legal education. Christoph Hafner has published in the fields of legal language, educational technology, and language education. Dr Lindsay Miller is an Associate Professor in the Department of English at City University of Hong Kong. He has been responsible for designing, developing and teaching a wide variety of courses. In the area of ESP service teaching he has taught mainly 'English for Engineering', 'English for Building and Architecture', and 'English for Biology and Chemistry'. In the Department's undergraduate courses he teaches mostly listening and speaking proficiency skills and conceptual courses such as those dealing with corporate training. The postgraduate courses he teaches are mainly concerned with such topics as learner autonomy and critical pedagogy. Dr Miller's main areas of research have focused on self-access language learning , and academic listening, and he has co-authored two books in these areas for Cambridge University Press - Establishing Self-Access: from Theory to Practice (1999) and Second Language Listening: Theory and Practice (2005). Anne Wagner, is an Associate Professor, Université du Littoral CÃ´te d'Opale, France and Research Professor, China University of Political Science and Law (Beijing, China). Since 2005 she has been President of the International Roundtables for the Semiotics of Law (IRSL). She is the founder of the website: http://www.semioticsoflaw.com; a founding Member of International Law and Language Association and a Permanent Member of the Scientific Committee of the Instituto Subalpino per l'analisi e l'insegnamento del diritto della attivitÃ  transanzionali - ISAIDAT. She has published extensively on issues relating to law and language.

'This collection by an impressive assemblage of international scholars uses a wide spectrum of disciplinary approaches ranging from discourse analysis to jurisprudence to semiotics to critical theory in probing the social, cultural, and discursive aspects of power and its expression in the legal context. It belongs on the bookshelf of anyone interested in critically engaging the intersection of language, law, and power in the contemporary world.' Janet Ainsworth, Seattle University, USA 'An innovative feature of this volume is that the specific concepts of transparency, power and control in legal communication are discussed from a wide range of methodological approaches and disciplinary perspectives. The varied provenance of the contributors, both in terms of nationality and professional background, favours a very rich exploration of the challenging issues concerning the complex relationship between these three relevant concepts, which are increasingly raised in the present-day socio-legal world.' Maurizio Gotti, University of Bergamo, Italy ’...this richly complex volume...with its wonderfully rich nuances, approaches, and ideas, inspires its readers to see law as it happens in everyday life in ways that are not always so readily apparent.’ International Journal for the Semiotics of Law