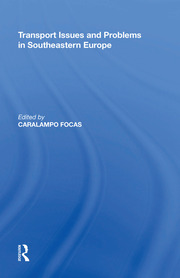 The collapse of previous command economic structures in Eastern Europe has led to an often chaotic reorganization of transport operations. Southeastern Europe in particular not only lags behind the western EU countries in terms of transport infrastructure, but also in terms of management and policy. However, despite this, or perhaps even because there are no long-standing established patterns, this region is a fertile territory for innovation. Based on the first major international conference dealing with transport issues in Southeastern Europe, this edited volume brings together key researchers and policy makers to discuss and critically analyse these innovations. Focusing on issues related to privatization and harmonization of national legislation, the contributors also address the countries' struggle with inadequate management structures and the challenges posed in running shipping, ports and railways in a region fragmented into numerous nations and states. It not only provides an up-to-date overview of transport operations and planning in Southeastern Europe, but also provides more general insights into recent and current developments in a region that has undergone widespread upheavals in the past two decades, and is now experiencing renewed growth.