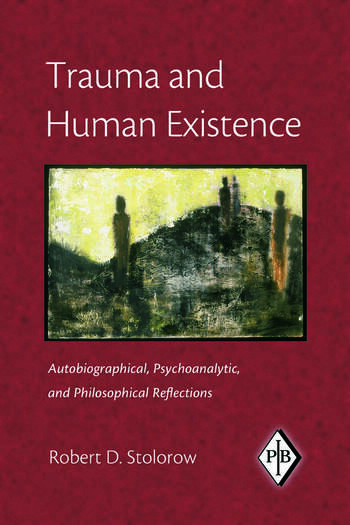 This volume traces how both themes interconnect, largely as they crystallize in the author’s personal experience of traumatic loss. As discussed in the book's final chapter, whether or not this constitutive possibility will be brought lastingly into the foreground of our experiential world depends on the relational contexts in which we live.

Taken as a whole, Trauma and Human Existence exhibits the unity of the deeply personal, the theoretical, and the philosophical in the understanding of emotional trauma and the place it occupies in human existence.

"As I left for a deployment to Iraq in the summer of 2008, I was wrestling with how to reach soldiers with traumatized experiences.... [While there] I stumbled upon the writings of Robert Stolorow. I obtained a copy of his recent book, Trauma and Human Existence (2007). It fundamentally changed how I work with traumatized military personnel [and it] profoundly altered my understanding of the impact trauma on an individual’s subjective experience of the world and helped me be empathic with traumatized soldiers in ways that enabled us to connect.... In my remaining months in Iraq, I read ... Trauma and Human Existence repeatedly, carrying it with me as I traveled between forward operating bases and outposts."--Russell B. Carr, Psychoanalytic Psychology (2011)

"In this book Robert Stolorow draws on philosophical reflections, primarily those of Heidegger, to further elucidate the phenomenology of emotional trauma, lending it depth and richness, and contextualizing it in the ontology of the human condition…. This is a book whose author remains steadfastly and unflinchingly present, both to the immediacy of his own pain and to the comfort he finds when such pain is understood…. [The] book is an admirable example of creative psychoanalytic writing, encompassing in a few pages almost everything one needs to understand about the principles of intersubjective psychoanalytic practice." —Dori Laub, Journal of the American Psychoanalytic Association, 58(5), 2010

"This book is a remarkable integration of deep self-reflections on intimate, often painful, and sometimes tragic experience, his philosophical investigation of selfhood in living context, and psychoanalytic theorizing on time, affect, and trauma. This is an important addition to the now long line of works that constitute the corpus of Stolorow and colleagues’ intersubjectivity theory." - Lewis Aron, Director, NYU Postdoctoral Program in Psychotherapy and Psychoanalysis, USA

"In his new book, Robert Stolorow has accomplished a minor miracle, presenting for the reader a theoretically complex, philosophically strong, and yet almost unbearably sad and humane understanding of traumatic experience. Anyone reading this book must take away from it not only a heightened appreciation for the uses of philosophical-psychoanalytic investigation and integration, but as important, a greater understanding of one’s own private life in which traumatic loss surely plays its central organizing role." - Estelle Shane, President, International Association for Psychoanalytic Self Psychology

"Robert Stolorow has done a masterful job of integrating two central themes: one involving the context-dependence of the experience of emotional trauma and the other relating to the idea that emotional trauma is built into the basic foundation of our existence. It represents psychoanalysis at its finest – its themes are beautifully conceptualized, richly exemplified, and profoundly relevant." - Judith Alpert, President, Division of Trauma Psychology, American Psychological Association, USA

"This is a fascinating, phenomenologically rich reflection on emotional trauma that shows the surprisingly powerful relevance of Heidegger for contemporary psychoanalysis." - Simon Critchley, Professor of Philosophy, New School for Social Research, USA

"Robert D. Stolorow's new book...is a poetic and deeply poignant study of psychological trauma. The work elegantly manages to convey a profound mastery of the nuances of trauma in a manner in which no prior work has achieved. It will be read many times over by those who first encounter it, with new wisdom to be discovered with each reading.  It is succinct, yet incisive and stirring.  It leaves a lasting impression." - Marilyn Jacobs, Trauma Psychology Newsletter

"Trauma and Human Existence is literally a slight book but with weighty themes. Stolorow has written a book based on years of theorizing and clinical practice. The simple structure of this book allows for repeated powerful statements that are based on decades of serious and creative thinking about good clinical listening." - Spyros Orfanos, PsycCRITIQUES

"Although a 'short' book, Stolorow presents a detailed theoretical and personal account of mood, unconscious, temporality and therapeutic change which draws upon the thought of Gadamer, intersubjective theory, and primarily the philosophical work of Heidegger. As such, it would be of interest to both practicing psychotherapists seeking to integrate philosophical insights into their work, and philosophers interested in the 'lived experience' of existentialist thought." - Laura Cook, Metapsychology Online

"Weaving his love affair with philosophy with his decades-long passion for positioning affect, and now, emotional trauma, within a relational, contextual field, Stolorow accomplishes a lot in a surprisingly brief treatise. Though often dense, and at times poignantly heart-wrenching, [it] is immensely readable.  Unsurprisingly, he makes a valuable contribution to the psychoanalytic literature on trauma and its vicissitudes." - Nancy VanDerHeide, Psychologist-Psychoanalyst

"This is a little gem of a book. Through his resolute effort, relational psychoanalysis has been enriched by phenomenology. Additionally, I have no doubt in my mind that readers who have experienced a traumatic loss in their lives will find validating resonance to the emerging insights of Stolorow's description and reflective understanding of the experience and resolutuion of this type of loss." - Mufid J. Hannush, Journal of Phenomenological Psychology 39, 2008

"Robert Stolorow takes the reader directly to the heart of trauma - as well as how to deal with it, including helping others who suffer such pain." - Christopher J. Mruk, The Humanistic Psychologist

"In this small but concentrated book, Robert Stolorow makes a most coherent case for an existential understanding of trauma, and it deserves to be read by anyone with an interest in trauma, existential philosophy, and psychotherapy." - Martin Adams, Existential Analysis

"I highly recommend this slim volume of expansive and robust ideas to all clinicians who seek an in-depth understanding of emotional trauma and its implications for treatment. It will be especially appreciated by those who welcome a phenomenological approach to the immeasurable impact of traumatic loss in one's own life, as well as the lives of those who come to us for understanding." - Lorraine Cates, Psychoanalytic Social Work

"In this book there is all the power and intensity of a human event, the turmoil of traumatic inconsolable grief, the courage of thinking that exposes and subjects itself to existence, to its reality, its flesh." - Antonio Sichera, Studies in Gestalt Therapy

"Trauma and Human Existence artfully captures the experience of trauma and its vicissitudes, while offering a sober rendering of how it is possible to live a life with an acute awareness of life's uncertainties." - Joan Rankin, Journal of Loss and Trauma

"Trauma and Human Existence is a thoughtfully written account of Robert Stolorow’s understanding of trauma when seen through the eyes of Heidegger’s Seinsdenken… His writing is clear and logical. He successfully uses his own experience in illustrating the phenomenon of trauma. He gives a clear account of the differences between traditional psychoanalytic theory and the assumptions used by an existential therapist." - Dominique Walmsley, Comparative and Continental Philosophy

"Robert Stolorow’s Trauma and Human Existence is ... a good dose of medicine. At the factual level it is about personal and individual trauma, and as such, is moving and thoughtful. At the epistemological level it is concerned with erroneous conceptions, with an ecological ignorance that neglects the deep embeddedness of humans in systemic relations with others’ experience and the surroundings. We are, despite this neglect, 'siblings in the same darkness,' as Stolorow says (p. 47). If we wish to take up our epistemological responsibility, this tiny book is a candle in the darkness." - Tor-Johan Ekeland, Phenomenology & Practice, Volume 4 (2010), No.1

"When he discovered Dr. Stolorow's book, Trauma and Human Existence in 2008 while he was still in Iraq, Dr. Carr carried the book around with him all the time, squeezing every bit of knowledge out of it that he could:"Stolorow's book was more like a companion in the darkness of trauma, helping me to understand and bear the experiences of being in a combat zone. Otherwise, I was left in my isolation, only with answers that seemed to blame my childhood fantasies about my parents for the mortars exploding outside my office." Dr. Carr feels that his adoption of Stolorow's ideas has saved both him and his patients from the isolation and despair of living in a shattered experiential world following combat." - Helen Davey, The Huffington Post