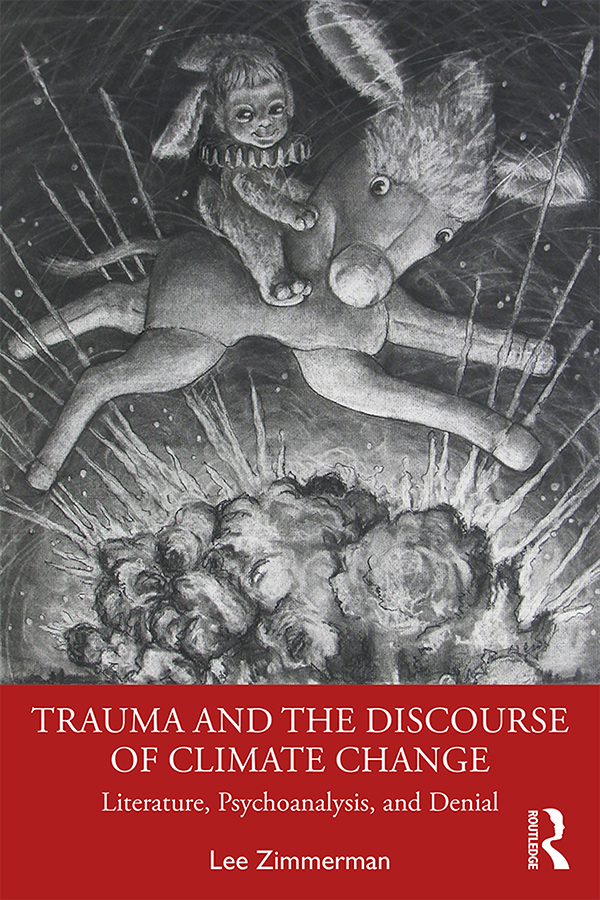 Trauma and the Discourse of Climate Change

The more the global north has learned about the existential threat of climate change, the faster it has emitted greenhouse gases into the atmosphere. In Trauma and the Discourse of Climate Change, Lee Zimmerman thinks about why this is by examining how "climate change" has been discursively constructed, tracing how the ways we talk and write about climate change have worked to normalize a generalized, bipartisan denialism more profound than that of the overt "denialists."

Suggesting that we understand that normalized denial as a form of cultural trauma, the book explores how the dominant ways of figuring knowledge about global warming disarticulate that knowledge from the trauma those figurations both represent and reproduce, and by which they remain inhabited and haunted. Its early chapters consider that process in representations of climate change across a range of disciplines and throughout the public sphere, including Al Gore’s An Inconvenient Truth, Barack Obama’s speeches and climate plans, and the 2015 Paris Agreement. Later chapters focus on how literary representations especially, for the most part, participate in such disarticulations, and to how, in grapplingwith the representational difficulties at the climate crisis’s heart, some works of fiction—among them Cormac McCarthy’s The Road and Russell Hoban’s Riddley Walker—work against that normalized rhetorical violence. The book closes with a meditation centered on the dream of the burning child Freud sketches in The Interpretation of Dreams.

Highlighting the existential stakes of the ways we think and write about the climate, Trauma and the Discourse of Climate Change aims to offer an unfamiliar place from which to engage the astonishing quiescence of our ecocidal present. This book will be essential reading for academics and students of psychoanalysis, environmental humanities, trauma studies, literature, and environmental studies, as well as activists and others drawn to thinking about the climate crisis.

‘This is a necessary book. Our representations of climate change aren’t adequate, our modes of interpretation are evasive, and the actions and policies based on those representations and interpretations take us further toward an uninhabitable planet. Most perversely, as Zimmerman emphasizes, even our most apparently sincere engagements with the climate crisis turn out to be new forms of denial. We say we recognize the problem; then act as if we do not. In canny readings of uncanny texts, Zimmerman shows the missing parts and points to where our thinking needs to go.’- James Berger, Yale University, USA; author of After the End: Representations of Post-Apocalypse

‘In Trauma and the Discourse of Climate Change, Lee Zimmerman offers a brilliant, unforgiving, and much-needed analysis of what we talk about when we talk about climate change, and what we don’t talk about, and why. The book persuasively argues that the dominant discourses of global warming that enabled denialism are a reaction to the trauma of the knowledge of that crisis, of the threats it poses not only to the planet but to our ways of knowing our world and ourselves. As the earth burns, Zimmerman’s is a call to recognize our grief for what is being lost and to work to save what still stands.’ - Samuel Cohen, University of Missouri, USA; author of After the End of History: American Fiction in the 1990s

‘Lee Zimmerman’s closely reasoned book is committed to telling 'the truth, the whole truth, and nothing but' about climate change—even as it explores how the "whole truth" will necessarily exceed our grasp. Zimmerman points out the major omissions in what many leading authors on this topic have said. Unlike Al Gore skipping over the inconvenient truths thatwere inconvenient to his ideological premisesor other authors who felt, like Jack Nicholson’s character in "A Few Good Men," that the public can’t handle the truth, this book holds nothing back. The stakes are too high, the implications too significant, to do less.’ - Michael D. Moore, Ph.D; founder, Core Narrative and former Senior Vice-President, Communications at Thomson Reuters

Lee Zimmerman is Professor of English at Hofstra University, USA, and editor of the journal Twentieth-Century Literature.