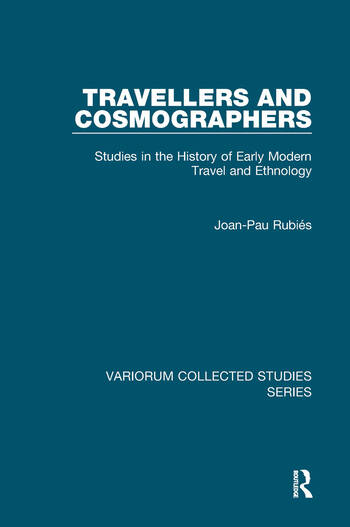 Travellers and Cosmographers: Studies in the History of Early Modern Travel and Ethnology

Joan-Pau Rubiés brings together here eleven studies published between 1991 and 2005 that illuminate the impact of travel writing on the transformation of early modern European culture. The new worlds that European navigation opened up at the turn of the 16th century elicited a great deal of curiosity and were the subject of a vast range of writings, much of them with an empirical basis, albeit often subtly fictionalized. In the context of intense literary and intellectual activity that characterized the Renaissance, the encounters generated by European colonial activities in fact produced a remarkable variety of images of human diversity. Some of these images were conditioned by the actual dynamics of cross-cultural encounters overseas, but many others were elaborated in Europe by cosmographers, historians and philosophers pursuing their own moral and political agendas. As the studies included here show, the combined effect was in the long term dramatic: interacting with the impact of humanism and of insurmountable religious divisions, travel writing decisively contributed to the transformation of European culture towards the concerns of the Enlightenment. The essays illuminate this process through a combination of general discussions and the contextual analysis of particular texts and debates, ranging form the earliest ethnographies produced by merchants travelling to Asia with Vasco da Gama, to the writings of Jesuit missionaries researching idolatry in India and China, or thinkers like Hugo Grotius seeking to explain the origin of the American Indians.

Contents: Introduction; Part I Historical Perspectives: Travel writing as a genre: facts, fictions and the invention of a scientific discourse in early modern Europe; New worlds and renaissance ethnology; Instructions for travellers: teaching the eye to see; Travel writing and ethnography. Part II Texts and Debates: Giovanni di Buonagrazia's letter to his father concerning his participation in the 2nd expedition of Vasco da Gama (1502-1503); The oriental voices of Mendes Pinto, or the traveller as ethnologist in Portuguese India; Futility in the New World: narratives of travel in 16th-century America; The Jesuit discovery of Hinduism: Antonio Rubino's account of the history and religion of Vijayanagara (1608); The concept of cultural dialogue and the Jesuit method of accommodation: between idolatry and civilisation; The Spanish contribution to the ethnology of Asia in the 16th and 17th centuries; Hugo Grotius's dissertation on the origin of the American peoples and the use of comparative methods; Addenda and corrigenda; Index.

Dr Joan-Pau Rubiés is Reader in International History at the London School of Economics, UK.

'The collection brings to the English-reading public research conducted in Portuguese, Spanish, Italian, and Dutch archives. It fills an important gap for historians of the early modern world and unravels a wealth of documentary resources. Joan-Pau Rubiés´s is one of the foremost writers on the history of early modern western travel, and the relation between travel, ethnography, and cosmography. ...these essays are uniformly superlative... Travellers and cosmographers is clearly written and widely researched. It is a treasure trove of ideas, insights, and allusions to new sources; the footnotes are extensive, revealing meticulous exploration of the European archives. The fact that the collection covers both East and West makes it required reading for students and scholars working in the field of early modern history.’ - Journal of Global History

'.. presents illuminating analyses in dense but engaged writing, and all essays, in order to do justice to the richness of scholarship and reflection they contain, would deserve a review of their own.’- Itinerario

'This volume collects together [Rubiés's] most important essays published between 1991 and 2005. It is to be particularly welcomed owing to the fact that several of the essays previously appeared in out of the way publications. ... Taken together, these sometimes densely argued, but always richly rewarding, essays fulsomely realize their ambitious objective, which is to show nothing less than how ’ travel writing decisively contributed to the transformation of European culture towards the concerns of the Enlightenment.’ - The Historical Journal

'As a stylist and guide through this information, Rubiés is lucid, always to point, satisfyingly ranging in his historical examples, and very skilled in drawing conclusions from a tantalizing body of primary evidence.’ - Sixteenth Century Journal