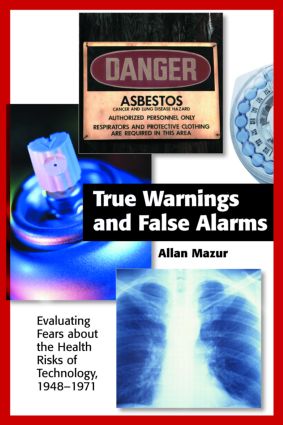 Evaluating Fears about the Health Risks of Technology, 1948-1971, 1st Edition

Given time, scientists reach consensus about the truth or falsity of a wide range of alleged hazards. Today, there is broad agreement that CFCs destroy stratospheric ozone. On the other hand, research does not support claims that electromagnetic fields from transmission lines cause a noticeable increase of leukemia. But new allegations continuously arise. Are manufactured chemicals in the environment distorting normal hormonal processes in our bodies? Are genetically modified foods a cause for concern? Addressing one of the most vexing problems in risk policy, Allan Mazur asks how we can tell, at an early stage, how seriously we should take a new warning. To identify hallmarks that could help predict the truth or falsity of an alleged hazard, Mazur analyzes 31 health warnings raised during the 1950s and 1960s about diverse technologies, including fluoridation, DDT, cyclamate, nuclear weapons testing, and birth control pills. Among his considerations are the initial source of an alarm, the biases held by its primary 'sponsors,' and the type of media coverage it receives. With 30 to 50 years of hindsight, he identifies characteristics - apparent from the outset of a controversy - that most effectively distinguish true warnings from false alarms. Early recognition and a timely response to a genuine hazard are important to protect our environment, health, and economic well-being. But if we act quickly and a warning turns out to be false, money is wasted, people are needlessly frightened, regulators lose credibility, and our ability to appropriately handle the next set of risks is compromised. Mazur's findings do not provide certainty about which of today's warnings will prove true and which will prove false. But they do help us to make informed judgments about where it is best and most reasonable to direct our worries and resources.

'A thought-provoking book with a heterogenic collection of cases. The author demonstrates that in some cases the risks were hyped and later proved innocuous. No comparable study exists of warnings that were unheeded, unhyped, and later proved true.' Choice 'An exemplar of applied social science. Until we have evidence otherwise, Mazur‘s hallmarks of true and false alarms should be our guides when deciding whether or not to believe the alarms of our time.' Environmental Science and Policy

Allan Mazur is a professor of public affairs in the Maxwell School of Syracuse University. An engineer and a sociologist, he has published nearly 200 papers and 5 books, including A Hazardous Inquiry, a study of the Love Canal controversy. Mazur is a fellow of the American Association for the Advancement of Science and was an RFF Gilbert White Fellow in 2000 - 2001.