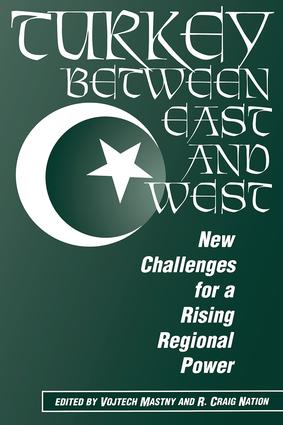 Turkey Between East And West

Linked by ethnic and religious affinities to two post-Cold War crisis areas—the former Soviet Union and Yugoslavia—Turkey is positioned to play an influential role in the promotion of regional economic cooperation and in taking new approaches to security. In this book, experts from Turkey, Europe, and the United States address key aspects of Turkey

"List of Tables, Preface, The Ottoman Rule in Europe From the Perspective of 1994, Turkey and the West Since World War II, Turkey in the New Security Environment in the Balkan and Black Sea Region, The Turkic and Other Muslim Peoples of Central Asia, the Caucasus, and the Balkans, Developments in Turkish Democracy, State, Society, and Democracy in Turkey, The State and Economic Development in Contemporary Turkey: Etatism to Neoliberalism and Beyond, Black Sea Economic Cooperation, Turkey and the European Union: A Multi-Dimensional Relationship With Hazy Perspectives, Turkish Communities in Western Europe, About the Editors and Contributors, Index, About the Book "

Vojtech Mastny is a fellow at the Woodrow Wilson International Center for Scholars in Washington, D.C. R. Craig Nation is in the Department of National Security and Strategy at the U.S. Army War College in Carlisle, Pennsylvania.