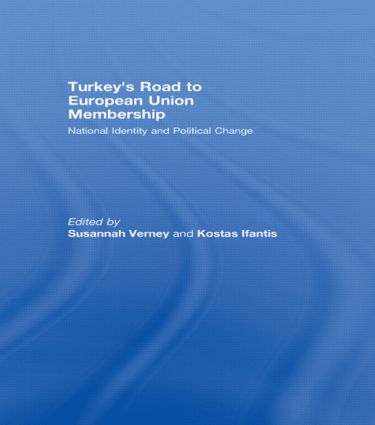 Enlargement to Turkey is arguably the greatest challenge facing the European Union today. After the narrowly averted "train crash" over Cyprus in 2006, the second election victory of the Justice and Development Party in July 2007 opened new prospects for Turkish-EU relations. But in an EU emphasising a collective identity based on shared civilisational values, Turkey’s European credentials have been increasingly called into question. Amending national identity through political change has become the key to the success or failure of the Turkish integration project. This volume examines the EU role in strengthening the domestic pro-reform coalition within Turkey, the paradox - and potential limits - of Turkey’s europeanising Islamists, and the impact of Europeanisation through conditionality, including a case study of Turkish policy towards the Cyprus Question. Also addressed are the Western stereotypes of Turkish identity influencing the country’s EU prospects, notably concerning the role of Islam in precipitating acts of political violence and its association with sexual and political violence in the discourse of European opponents of Turkish accession. Finally, the dynamics of EU accession negotiations are analysed and the potential role of a norm-driven rhetorical strategy in promoting Turkish accession as a moral and democratic imperative is discussed.

3. Running Around in Circles? The Cyclical Relationship between Turkey and the European Union Luigi Narbonne and Nathalie Tocci

6. The Europeanisation of Turkey and its Impact on the Cyprus Problem* Kivanc Ulusoy

7. Religiosity and Protest Behaviour: The Case of Turkey in Comparative Perspective Ersin Kalaycioglu

8. Turkish Identity on the Road to the EU: Basic Elements of French and German Oppositional Discourses Hakan Yilmaz

Kostas Ifantis is Associate Professor of International Relations at the University of Athens.