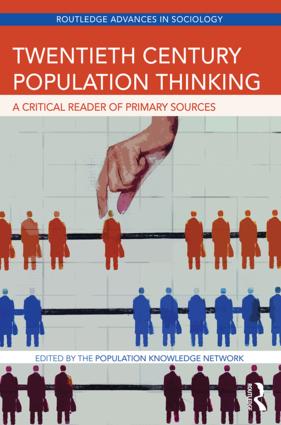 Edited by The Population Knowledge Network

This reader on the history of demography and historical perspectives on "population" in the twentieth century features a unique collection of primary sources from around the globe, written by scholars, politicians, journalists, and activists. Many of the sources are available in English for the first time. Background information is provided on each source. Together, the sources mirror the circumstances under which scientific knowledge about "population" was produced, how demography evolved as a discipline, and how demographic developments were interpreted and discussed in different political and cultural settings. Readers thereby gain insight into the historical precedents on debates on race, migration, reproduction, natural resources, development and urbanization, the role of statistics in the making of the nation state, and family structures and gender roles, among others. The reader is designed for undergraduate and graduate students as well as scholars in the fields of demography and population studies as well as to anyone interested in the history of science and knowledge.

'The book goes well beyond presenting annotated primary sources. In addition to the general introduction, there are eight highly informed essays, complete with historiographical clarifications and selected bibliographies for further reading.'

The Population Knowledge Network was established in 2011 with support from the Deutsche Forschungsgemeinschaft (German Research Foundation).

Its goal is to study the history of demography in the twentieth century through a double lens: the lens of the history of knowledge and science together with the lens of social and political history. One of the network's main interests lies in the production, transfer, and application of demographic knowledge across geographic, cultural, social, and time differences, especially with regard to the interdependence between demography and politics.

Our interest is based on the assumption that knowledge is produced in specific cultural and social contexts and that knowledge and scholars contribute to defining, and thus creating, social problems. Studying the history of demography, an academic discipline characterized by its close proximity to politics, promises valuable insights into this phenomenon.

Second, the history of demography, which has been written only in part so far, deserves systematic attention because of its genuinely transnational character. Demography as an academic discipline and demographic knowledge evolved as products of transnational networks and discourses, which is supposedly reflected in its methods and approaches.

Analyzing the history of demography as a transnational process should allow insight into the functioning of expert networks, the possibilities and limits of transferring knowledge, and the relation between national and transnational structures and developments. Third, the role and effects of demographic knowledge outside of Europe and the West need to be studied in greater detail, especially with regard to the relation between development politics and the Cold War. All three inquiries need to take seriously the genuinely interdisciplinary character of demography.