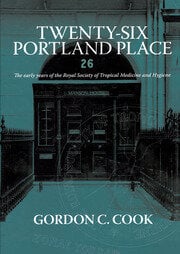 Twenty-Six Portland Place: The Early Years of the Royal Society of Tropical Medicine and Hygiene

Twenty-Six Portland Place is a ground-breaking exploration of the early years of the Royal Society of Tropical Medicine and Hygiene, from its foundation in 1907 to its half-century in 1957. Following its formation at the height of the Empire, it became a forum in which to discuss and develop ideas and current research by physicians and clinical parasitologists into diseases prevalent in warm climates. The book also traces the Society's growth and development through two world wars and the turbulent national, international and medical politics of the period. As a former President of the Society with full access to its archives, Gordon C. Cook is uniquely placed to create this account, which will be of particular interest to historians and clinicians with an interest in tropical medicine, and to fellows of the Society.