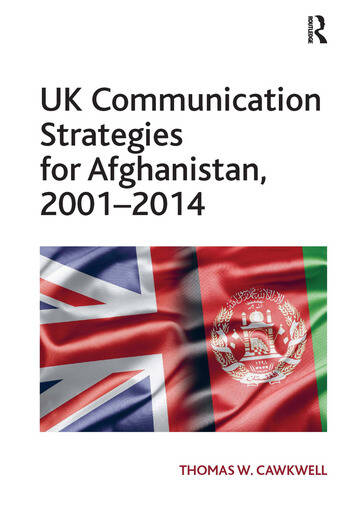 The war in Afghanistan came to an end in 2014 after nearly thirteen years of conflict. Throughout that period, British officials have described UK operations there in various conflicting and often contradictory ways; as a counter-terrorism mission, a stabilisation mission, and a counter-narcotics mission, respectively. This book investigates how the war was ’sold’ to the British public and how Britain’s ’transnational’ foreign and defence policy impacted on the unfolding of UK strategy in Afghanistan and the way it was communicated. It argues that because the UK’s foreign and defence policy is transnationally-oriented - meaning that it is foundationally aimed at maintaining alliance with the United States and the institutional coherence of NATO - UK strategy is contingent upon collective security and, crucially, is fundamentally concerned with the means of policy (maintaining alliances) over the ends (using alliances to effect change). Explaining the inalienability of collective security systems to national security is no easy task, however, and, when faced with the adversities of Afghanistan, the UK state has since 2008 instead opted to describe the significance of Afghanistan in narrow, nation-centric, counter-terrorist concerns in order to maintain public support for collective security operations there whilst, paradoxically, framing the conflict in a manner that avoids talking about the transnational structure and purpose of the mission. This kind of ’strategic’ communication is increasingly becoming a focus of the UK state as it faces a transnational dilemma of maintaining its collective security bonds whilst facing a public increasingly sceptical of liberal interventionism.

Thomas Cawkwell is an independent scholar based in the north of England. He recently completed his doctorate in sociology at the University of Exeter, following previous degrees from the University of Hull. He was born in Yorkshire and raised in Texas, creating an enduring interest in the 'special relationship' and its role in the 'War on Terror'.

'Thomas Cawkwell provides a fine-grained examination of the evolution of UK strategy and civil-military relations during the war in Afghanistan, as well as a detailed insight into the wider evolution of defence and security policy making during this period, and the workings of the Blair, Brown and Cameron governments in Whitehall. His book develops a powerful critique of British strategy making in the Afghan context between 2001-14.'

'A well-informed and thoughtful response to British strategic dilemmas over Afghanistan, focussing on the issues raised by having to devise a coherent defence of strategy in the context of difficult international and domestic contexts. A significant contribution to the debate over current British strategy.'

'This important and closely argued work clearly shows how the constraints of transnational alliances and internal dissonance are at the heart of current problems within British strategy. In detailing how the UK’s strategic narrative in Afghanistan shifted and morphed in response to both these constraints and operational realities, Cawkwell fascinatingly highlights the inconsistencies, not only in the message, but also in the strategy such messages were meant to support. It is a must read for those interested in British policy, strategy, or communications.'

"Cawkwell offers here a forensic analysis of changing narratives of British propaganda strategies in Afghanistan from the invasion until the war ended. It further adds to a body of evidence and scholarship critiquing the role the centrality of the United States plays in British foreign policy. Argument focuses on how the 'transnational dilemma' (King, 2010) between appealing to the public about the benefits of collective security makes acknowledging realistic costs of delivery difficult in strategic narratives."