UK Economy: The Crisis in Perspective
Essays on the Drivers of Recent UK Economic Performance and Lessons for the Future 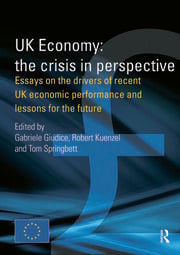 UK Economy: The Crisis in Perspective: Essays on the Drivers of Recent UK Economic Performance and Lessons for the Future

The global financial crisis, which began in 2007, was probably the biggest shock to hit the UK economy in living memory. Since the beginning of this crisis, much has happened that might previously have been thought impossible: the virtual nationalization of two of the UK’s largest banks, a government deficit in double digits, a negative watch on the UK’s AAA credit rating, a Bank of England base rate 150 basis points below its previous all-time low, and a £200,000m. programme of quantitative easing. These momentous events have demanded a fundamental reworking of the traditional analysis of the UK economy.

The publication of UK Economy: The Crisis in Perspective meets this need for a radical new analysis of the UK economic system. The book is an edited collection of papers presented to a European Commission seminar held in June 2010 to discuss prospects for the UK economy, the book includes chapters by some of the most prominent and respected commentators on the UK economy, including Christopher Pissarides, winner of the 2010 Nobel Prize for economics sciences, Martin Weale, recently appointed to the Bank of England's Monetary Policy Committee and Dave Ramsden, Chief Economic Adviser to the Treasury.

The highly distinguished group of authors, coverage and analysis of issues central to recent UK economic history, along with the European Commission's assessment of UK economic prospects make this essential reading for economists, business and financial people, academics and students, as well for all those interested in the historical background of, and prospects for, the UK economy.

Information in the chapters will be supplemented by a number of charts and tables offering information in graphic form.

The contributors are: Gabriele Giudice, Head of the Unit responsible for the UK, Estonia and Latvia in the Directorate General for Economic and Financial Affairs (DG ECFIN) at the European Commission; Robert Kuenzel, an Economist in DG ECFIN; Thomas Springbett, UK country desk officer in DG ECFIN, responsible for forecasting and surveillance; Christopher Pissarides, professor of economics at the London School of Economics and holder of the Norman Sosnow Chair in Economics; Ray Barrell, professor at Brunel University; Philip Davis, senior fellow at the National Institute for Economic and Social Research; Martin Weale, an independent member of the Bank of England’s Monetary Policy Committee; Xavier Ramos, associate professor at the Universitat Autonoma de Barcelona; Dave Ramsden, Managing Director of Macroeconomic and Fiscal Policy at HM Treasury and joint Head of the UK Government Economic Service.

Chapter 3: British labour market performance before the crisis, 1993 - 2007, by Christopher A. Pissarides

Chapter 6: Long-term effects of fiscal policy on the size and distribution of the pie in the UK, by Xavier Ramos and Oriol Roca-Sagales

Chapter 7: The changing relationship between the UK economy and its banking sector, by Thomas Springbett

Chapter 8: Policy efficacy in the crisis, exit strategies and the return of growth, by E. Philip Davis and Dilruba Karim

Chapter 9: Disease and cure in the UK: the fiscal impact of the crisis and the policy response, by Rowena Crawford, Carl Emmerson and Gemma Tetlow

Chapter 10: The government's strategy for sustainable growth, by Dave Ramsden

This is one of the first comprehensive attempts by a group of well qualified and objective economists from the European Commission and leading UK economics institutions to provide a rigorous analysis of UK economic policy in the last decade. It’s a job much needed - and very well done.’ – Roger Liddle, former Europe adviser to Tony Blair and Labour member of the House of Lords