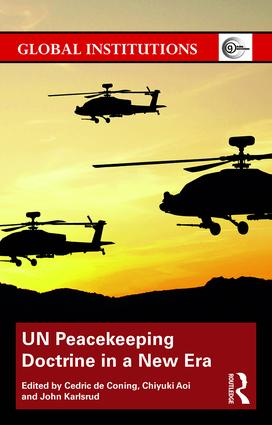 This edited volume offers a thorough review of peacekeeping theory and reality in contemporary contexts, and aligns the two to help inform practice. Recent UN peacekeeping operations have challenged the traditional peacekeeping principles of consent, impartiality and the minimum use of force. The pace and scope of these changes have now reached a tipping point, as the new mandates are fundamentally challenging the continued validity of the UN peacekeeping’s core principles and identity.

In response the volume analyses the growing gap between these actual practices and existing UN peacekeeping doctrine, exploring how it undermines the effectiveness of UN operations, and endangers lives, arguing that a common doctrine is a critical starting point for effective multi-national operations. In order to determine the degree to which this general principle applies to the current state of UN peacekeeping, this book:

Combining empirical case-based studies on UN peace operations, with studies on the views and policies of key UN Security Council members that generate these mandates, and views of key contributors of UN peacekeepers, this volume will be of great use to policy-makers; UN officials and peace operations practitioners; and academics working on peace and conflict/security studies, international organizations and conflict management.

'Peacekeeping is a creation of practice rather than law, and it has gone through many transformations since its creation. As conflicts go through a profound mutation, so should peacekeeping. This volume offers important recommendations that should help peacekeeping reinvent itself, going beyond principles that are no more adapted to the realities of contemporary conflict.' - Jean-Marie Guehenno, the former UN Under Secretary-General for Peacekeeping and currently the President & CEO of the International Crisis Group (ICG)

'Aoi, Karlsrud and De Coning have produced a timely and relevant study on the changing nature of UN Peacekeeping, focusing on the widening gap between principles and practice, and the need to upgrade doctrine to include key concepts such as stabilization. The authors not only focus on the current challenges posed by the latest generation of lethal non-state actors, but they also offer direction for how UN Peacekeeping doctrine and political realties can be reconciled.' – Dr. Karin von Hippel, Director General, Royal United Service Institute

'Realistic. Timely. objective. Extremely necessary. Touch the key point: principles, doctrine and practice; the most important question in UN peacekeeping. All the peacekeepers, from New York to the field should read this book, fundamental to protect civilians and UN itself.' - Lt.Gen. Carlos Alberto Santos Cruz, former Force Commander of the UN mission in the Congo (MONUSCO)

'At a time when peace operations are confronting increasingly complex and dangerous challenges, the United Nations' High Level Panel could only begin a much-needed attempt to bring doctrine and practice closer together. This thoughtful volume significantly advances this essential task: both practitioners and analysts should read it and be provoked to engage in a debate which is vital for the UN and its partners.' - Ian Martin, Executive Director, Security Council Report and member of the UN High Level Panel on Peace Operations

'The security architecture of the 21st century places an increasing reliance on the use of force in peacekeeping. The Security Council has crafted mandates, which in some cases go beyond the existing norms of peacekeeping and this has resulted in situations where existing physical and doctrinal deficiencies leaves peacekeepers vulnerable and unsuitable for the task. This book works towards identifying the gaps between international ambitions, present doctrine, principles, operational procedures and actual practice, reappraises the doctrinal deficit and presents options for a UN doctrine for future missions. Undoubtedly a valuable literary addition to the UN Peacekeeping reform process that is presently underway.' - Lt.Gen. Abhijit Guha, former Deputy Military Advisor to the UN and member of the UN High-level Independent Panel on Peace Operations

Cedric de Coning is a Senior Research Fellow with the Peace and Conflict Research Group at the Norwegian Institute of International Affairs and is a Senior Advisor on Peacekeeping and Peacebuilding for ACCORD, South Africa.

John Karlsrud is Senior Research Fellow at the Norwegian Institute of International Affairs. He is an External Associate at the Centre for the Study of Globalisation and Regionalisation, University of Warwick, UK.