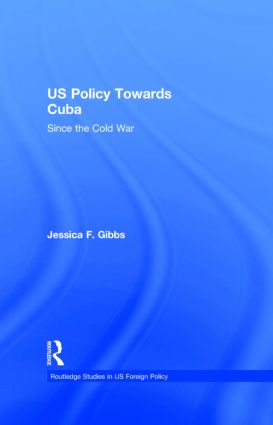 Since the Cold War, 1st Edition

US Policy Towards Cuba is a comprehensive examination of U.S. policy towards Cuba after the Cold War, from 1989-2008. It discusses the competition between Congress and the executive for control of policy, and the domestic interests which shaped policymaking and led to the passage of two major pieces of legislation (the Cuban Democracy Act of 1992 and the Cuban Liberty and Democratic Solidarity Act of 1996, better known as the Helms-Burton Act) which tightened the embargo on Cuba and were fiercely resisted by U.S. allies. There is also a strong focus on migration as an issue in U.S.-Cuban relations.

The book then moves on to examine U.S. policy during the second Clinton administration, when the interest group environment altered for two principal reasons. Firstly the case of the small Cuban rafter boy, Elian Gonzalez, attracted huge media coverage and led to public questioning of the wisdom of current policy, and secondly the agricultural lobby, keen to export to Cuba, lobbied for the Trade Sanctions Reform and Export Enhancement Act, which finally passed in 2000. The final section of the book analyses democracy promotion efforts under President George W. Bush.

Seeking to cast light upon the US policymaking process, Gibbs demonstrates that U.S. Cuba policy represents a rather extreme example of the influence of domestic politics on policymaking, and provides a significant contribution to this important and under-researched aspect of U.S. foreign policy.

'Gibbs's work makes an important contribution to the study of a major strand in the convoluted process of contemporary US foreign policy-making, It has also brought to light a lot of pertinent information not found in the more standard accounts of the United States' distinctly forlorn policy towards post-Cold War Cuba.' - Philip Chrimes, Itnernational Affairs, Vol. 87, 5, September 2011

1. The United States and Cuba: From the Cuban Revolution to the Fall of the Berlin Wall 2. The Cuban Democracy Act: ‘Putting the Hammer down on Fidel Castro’? 3. Continuity and Change under Clinton 4. The Rafter Crisis of 1994 5. The Helms-Burton Act: ‘Adios Fidel’? 6. The Transformation of the Anti-Embargo Movement 7. The Elian Gonzalez Case: ‘We won’t Forget, We Vote’ 8. George W. Bush: Champion of the Anti-Castro Cause? 9. Conclusion

Jessica F. Gibbs completed her PhD at the University of Cambridge in 2005 and lectures in History at the University of Aberystwyth. Her research interests include US foreign policy, in particular the influence of domestic politics on the policymaking process, US-Latin American relations and migration.