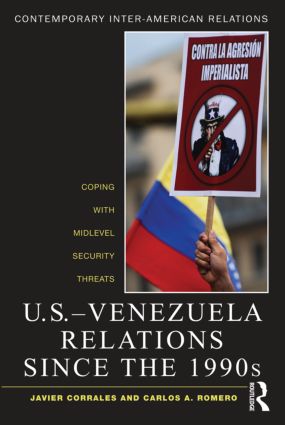 U.S.-Venezuela Relations since the 1990s

By Javier Corrales, Carlos A. Romero

U.S.-Venezuela Relations since the 1990s explores relations between these two countries since 1999, when Hugo Chavez came to office and proceeded to change Venezuela's historical relation with the United States and other democracies. The authors analyze the reasons for rising bilateral conflict, the decision-making process in Venezuela, the role played by public and private actors in shaping foreign policy, the role of other powers such as China, Russia, Iran, and Saudi Arabia in shaping U.S.-Venezuelan relations, the role of Venezuela in Cuba and Colombia, and the impact of broader international dynamics in the bi-lateral relations.

"No one has better explained the strange relationship between the United States and Hugo Chavez's Venezuela than Javier Corrales and Carlos Romero. In their words, Venezuela has chosen to ally with "Lilliputians" like Nicaragua and "international pariahs," like Iran and North Korea, to project anti-Americanism while remaining a reliable oil supplier. This superb study of convoluted charisma also contributes theoretically to our understanding of international relations."

"This study closely examines the US-Venezuela relationship, the most complex and contentious of the US relationships with Latin America. Theoretically informed and well researched, the study provides a nuanced analysis useful to any scholar working in the area. It will also be an important book for any course on US-Latin American relations."

"In this theoretically grounded volume, Javier Corrales and Carlos Romero provide a thorough review of Venezuela’s evolving foreign policy towards the United States and the world during the government of Hugo Chávez. The authors demonstrate a fine command of the nuances of Venezuelan foreign and domestic politics during the past decade. They deploy this to great effect by integrating international and domestic explanations for the increasingly adversarial tenor of the bilateral relationship between the United States and Venezuela. This should prove a valuable addition to scholarship on Venezuela and its place in the world."

Javier Corrales is Professor of Political Science at Amherst College in Amherst, Massachusetts, specializing in Comparative Politics and International Relations of Latin America and the Caribbean. His most recent book, Dragon in the Tropics: Hugo Chávez and the Political Economy of Revolution in Venezuela (Brookings Institution Press, 2011), co-authored with Michael Penfold, won the Foreign Affairs award for Best International Relations Book on the Western Hemisphere for 2011. His research has been published in numerous academic journals, and he is on the editorial board of Latin American Politics and Society and Americas Quarterly.

is a Venezuelan political scientist specializing in International Relations and Venezuelan Foreign Policy. He is Professor Emeritus in the Institute of Political Studies at the Universidad Central de Venezuela. He has published five books and eight in collaboration. His articles have appeared in numerous Venezuelan and foreign journals. His most recent book is Venezuela y la Integración Regional (2008).

This series provides an overview of current U.S.-Latin American bilateral relations, covering political, economic, and security topics, as well as discussion of drug trafficking and international migration. The impact of democratization, increased economic openness, and the changed security environment after the Cold War in the region are explored in each volume, all the while engaging with each country’s particular history, resource endowment, institutional features, and leadership characteristics.