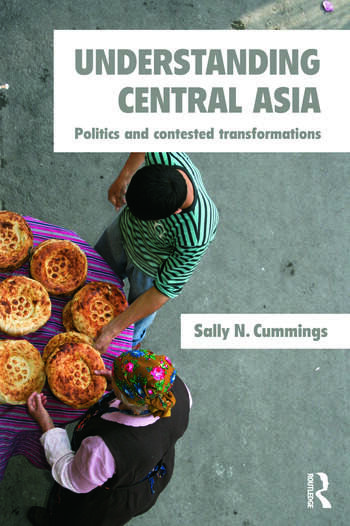 Since Soviet collapse, the independent republics of Kazakhstan, Kyrgyzstan, Tajikistan, Turkmenistan and Uzbekistan have faced tremendous political, economic, and security challenges. Focusing on these five republics, this textbook analyzes the contending understandings of the politics of the past, present and future transformations of Central Asia, including its place in international security and world politics. Analysing the transformation that independence has brought and tracing the geography, history, culture, identity, institutions and economics of Central Asia, it locates ‘the political’ in the region.

A comprehensive examination of the politics of Central Asia, this insightful book is of interest both to undergraduate and graduate students of Asian Politics, Post-Communist Politics, Comparative Politics and International Relations, and to scholars and professionals in the region.

"True to its title, this thought-provoking study offers a nuanced understanding of contemporary Central Asia that cuts through stereotypes and situates the region in broader social science and history debates. With its clear thematic structure it offers an incisive and accessible account of the principal influences on the political transformation of the Central Asian states. This is a book that should be read not only by advanced students of the new Eurasia, but all those interested in deepening their knowledge in this fascinating and increasingly diverse part of the world." - Roy Allison, University of Oxford, UK

"This book provides a clear and persuasive interpretation of political developments in the post-Soviet Central Asian states. The author deftly weaves together a broad range of factors that shaped the countries’ recent evolution, including the legacy of the past, religion, national identity, economics, and international relations. She also situates her interpretation in the context of the scholarly literature on the subject. Her analysis is well informed and judicious. People seeking an introduction to contemporary Central Asia should start here. Those who are familiar with the subject will enjoy her engagement with the diverse body of scholarly opinion. This book deserves to be essential reading on Central Asia today." - Muriel Atkin, George Washington University, USA

"This is a superb guide to contemporary Central Asia by a leading scholar in the field. Professor Sally Cummings assesses the political transformation of the five former Soviet ‘stans’ since their emergence as independent states in 1991, as well as the economic, foreign policy, and security challenges facing each state. Concise yet comprehensive, Understanding Central Asia is an excellent introduction to the region for scholars, students, and professionals." - Adrienne Edgar, University of California, Santa Barbara, USA

"Understanding Central Asia: Politics and Contested Transformations is a masterful and encyclopedic work, and ever so timely, coming as it does at the twentieth anniversary of the collapse of the U.S.S.R. and the formation of these five countries. Seeking to merge social science theory with an area studies approach, Cummings’ work touches on all the fundamental questions relating to state-building in the Central Asian region. In a cogently written fashion she makes the reader aware of the conflicting interpretations on how to understand the Central Asian region, both how it is constituted, what colonization brought to these territories, and whether years of Soviet rule were a further continuation of colonization or a different kind of political experience." - Martha Brill Olcott, Carnegie Endowment For International Peace, USA

"This book is both a major achievement and an important contribution to the field of Central Asian studies. Drawing upon a rich body of literature from across the social sciences and humanities, it offers the most comprehensive account of the region's political transformation since it was jolted into independence from Soviet rule in 1991." - Pauline Jones Luong, Brown University, USA

"This is an important and timely book. It provides the ‘state of the art’ of contemporary Central Asian studies as well as a clear and persuasive interpretation of the post-Soviet Central Asian states... For more advanced students... and for practitioners of the field, this is essential reading and the book generally provides a vital service to the community of Central Asian scholars." - Roland Dannreuther, University of Westminster, UK; International Affairs 88: 4, 2012

"The investigative journey of the volume offers a careful and considerate interrogation of the construction and individualization of Central Asia in world politics. In fact, it will make an excellent undergraduate textbook for the study of Central Asian affairs. Cummings’ book offers a persuasive interpretation of the post-Soviet trajectories of Central Asia. It also provides a thought-provoking contextual examination of the multiple and often contradictory processes underpinning the security, economic, and political trends of the region. It is expected therefore that Cummings’ investigation would be welcomed not only by students of Central Asia and its social, political, and economic dynamics but also by all those interested in the comparative politics and international affairs of the post-Soviet space." - Emilian Kavalski, PhD, University of Western Sydney, Journal of International and Global Studies

"Overall, the presentation is introductory, concise, and synoptic, leading the reader into the debates and literature, focusing on key personalities, salient dates, and important facts before presenting its own views. It provides the necessary bibliography, allowing readers to verify the author’s assessments and extend their comprehension of the topic. It is a welcome addition to the relatively sparse literature on contemporary Central Asia and should prove an effective guide to those interested in understanding the complex political dynamics of the region after the end of the Soviet period." - George Malagaris, Oxford Centre for Islamic Studies, Journal of Islamic Studies, vol 26, no 3, September 2015, 365-366