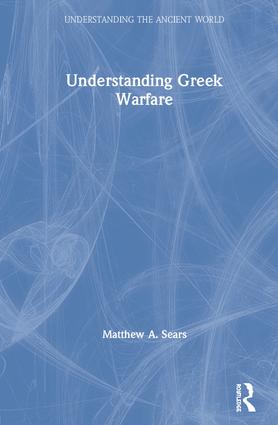 By Matthew A. Sears

Understanding Greek Warfare offers a wide-ranging survey of Greek warfare, from the Mycenaeans through to the Hellenistic kingdoms’ clashes with Rome. Each chapter provides an overview of a particular theme and historical period, and a detailed discussion of the relevant sources, both ancient and modern. This volume covers not only the development of equipment, tactics, strategy, and the major wars of Greek history – the "drums and trumpets" – it also examines the political, social, and cultural importance of warfare in each period. Each chapter outlines major scholarly debates, such as the true nature of hoplite battle and whether Alexander the Great had a strategic vision beyond conquest, and includes several short selections from the primary literary evidence.

Readable yet scholarly, this book is an ideal companion to courses on Greek warfare and society, and offers detailed suggestions for further reading and research. Understanding Greek Warfare will be a crucial resource for students of war in the ancient Greek world, and of the ancient Greeks in general.

"This is a hugely impressive, and just as importantly, enjoyable book that offers the reader much more than the usual general survey of this fascinating subject. Its pages are packed with the author’s evaluation of evidence, discussions about scholarly debates, and explanations of the evolving art of war, all the way from the Mycenaeans to the Macedonians. This is, then, a fresh new look at a topic that continues to captivate a wide audience that transcends the boundaries of academia." - Jason Crowley, Manchester Metropolitan University, UK

"Matthew Sears has done an admirable job … Sears writes lucidly and in an engaging way … Understanding Greek Warfare is highly recommended if warfare in Ancient Greece is still somewhat new to you, or if you'd like to freshen up your knowledge of the overall context or the current academic 'state of play'." - Jasper Oorthuys, Ancient Warfare magazine 2019

"In this relatively slim volume Prof. Sears (New Brunswick, Canada) rather impressively manages to produce an overview of some 1,200 years of warfare in ancient Greece." - The NYMAS Review

"Ancient military history remains a booming area of Classical Studies. In the last decade, major collective works have been published. While these publications provide wide-ranging overviews of various periods and aspects of ancient warfare, their design (and price) is better suited for specialist scholars than for undergraduates. We are therefore grateful to the publishers for including a volume dedicated to ancient Greek warfare in their Understanding the Ancient World series of introductory textbooks; as such, it is the first book on this topic especially designed for tertiary teaching purposes… Sears’ book offers a detailed presentation of the vast and difficult topic. As regards its suitability as a textbook for educational purposes at the tertiary level, it will have significant utility." - Bryn Mawr Classical Review

The Mycenaeans and War

Homer and His "Heroes"

Homeric Battle: The Duel of Paris and Menelaus, and Its Aftermath

Chapter 2: The Hoplite Phalanx: The Rise of the Polis

The Phalanx: Its Rise, Equipment, and Tactics

The Iconography of the Citizen-Soldier

Thalassocracy: The Naval Mob and Empire

The Navy in the Athenian Visual Landscape

Thucydides, Author of the War

An Overview of the Peloponnesian War

Strategy and Tactics beyond the Phalanx

A New Breed of Leader

War and the Greek Mind

The Heyday for Mercenaries?

Professional Generals and the Art of War

Does the Phalanx still Matter? Epameinondas and the Rise of Thebes

Chapter 6: Philip and Alexander of Macedon: Crushing the Polis, Conquering the World

Sources for Philip and Alexander

Alexander and his War Machine

Case Studies: The Siege of Tyre and the Battle of Gaugamela

Chapter 7: Warfare in the Hellenistic World: The Coming of Rome

Hellenistic Kingdoms and the Polis

Case Studies: Pyrrhus of Epirus and Hannibal of Carthage

Conclusions: The End of the Hellenistic World – and the Roman Republic

Matthew A. Sears is an Associate Professor of Classics and Ancient History at the University of New Brunswick in Canada. He writes on ancient Greek history, society, and culture, and is the author of Athens, Thrace, and the Shaping of Athenian Leadership (2013) and co-author of Battles and Battlefields of Ancient Greece: A Guide to their History, Topography, and Archaeology (forthcoming).