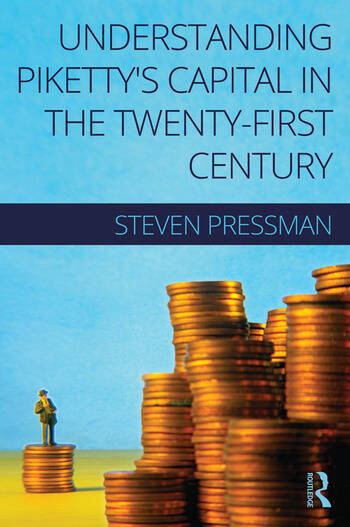 Thomas Piketty’s Capital in the Twenty-First Century reached the top of most best-seller lists last year shortly after it was released. Nonetheless, few people actually read the book. Yet reviewers have agreed that the book is important because it touches on one of the major problems facing the US economy, the UK economy and many developed nations: rising income and wealth inequality. It also provides an explanation of the problem and a policy solution: a global wealth tax.

This book is intended to do three things. First, it provides a summary of the argument of Piketty’s book, which many people have bought and few people have read. Second, it fills in some of the gaps in the book, by providing readers with the background that is needed to understand the volume and the argument. This background information discusses economic data sources, measures of inequality and why income inequality is such an important issue today. Finally, the work provides a defense of Piketty’s analysis and at times some criticism of his work.

Pressman explains why the problem of rising inequality is important, where Piketty’s data comes from, and the strengths and weaknesses of that data. It defends Piketty’s inequality, r>g, as the reason inequality has risen over the past several decades in many developed nations. Using Piketty’s own data, this book argues that rising inequality is not just a characteristic of capitalism, but results from different growth rates for income and wealth, which can occur under any type of economic system.

Understanding Piketty's Capital in the Twenty-First Century is the ideal introduction to one of the most important books of recent years for anyone interested in Piketty’s work and the inevitability of inequality.

Steven Pressman is Professor of Economics at Colorado State University in Fort Collins, Colorado, and Professor Emeritus of Economics and Finance at Monmouth University in West Long Branch, NJ. He also serves as North American Editor of the Review of Political Economy, Book Review Editor of the Eastern Economic Journal, and Treasurer of the Eastern Economic Association. Pressman has published more than 150 articles in refereed journals and as book chapters, and has authored or edited 17 books, including A New Guide to Post Keynesian Economics (2001), Alternative Theories of the State (2006), and 50 Major Economists, 3rd ed. (2013), which has been translated into five different languages. He is also a frequent contributor to local newspapers, and appears frequently on local and national TV.

Steven Pressman’s book is the most balanced, sympathetic and constructive critique of Piketty’s Capital in the Twenty-First Century I have yet read...It is in many ways, and as a critical text, a significant improvement on the original. Pressman does more than provide an accessible account of the key aspects of Capital. Rather, Pressman takes the key aspects as a point of departure in order to provide fuller contextualised explanation of the trends and issues arising as well as the accounts of theory that Piketty could himself have usefully incorporated in Capital.' -- Jamie Morgan, Review of Political Economy

‘This is the most important critique of the most important book in economics in recent years. Pressman breaks down Piketty in a manner that will be valuable to both scholars and students alike.’ — Robert S. Rycroft, Professor of Economics, University of Mary Washington, USA

‘Piketty's Capital in the 21st Century is one of the most widely discussed books so far in this century, but what is badly needed is a good-humored, readable introduction, which is provided by Steven Pressman's Understanding Piketty's Capital in the 21st Century. Like Piketty, Pressman is a chronicler of inequality.’ — E. Ray Canterbery, Professor Emeritus of Economics, Florida State Univerisity, USA