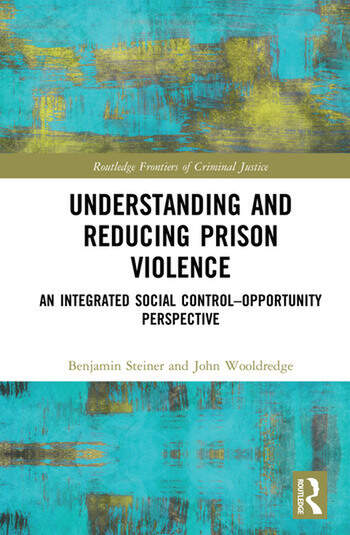 Understanding and Reducing Prison Violence considers both the individual and prison characteristics associated with violence perpetration and violent victimization among both prison inmates and staff.

Prison violence is not a random process; rates of violence vary across prisons and the odds of perpetrating violence or experiencing violent victimization vary across inmates and staff. A comprehensive understanding of the causes of prison violence therefore requires consideration of both individual and prison characteristics.

Building on large dataset comprising 5,500 inmates and 1,800 officers across 45 prisons located across two of the United States (Ohio and Kentucky), this book showcases one of the largest and most comprehensive studies of prisons carried out to date. It considers both the implications of the study for theories of prison violence and the implications of the study for preventing violence in prisons. It will be of interest to academics, practitioners, and policy makers alike.

Violent Offending and Victimization Among Inmates

General theories of crime and victimization

Sample of Ohio and Kentucky prisons

Chapter 5. Identifying the Most Relevant Effects on Violent Offending and Victimization in Ohio and Kentucky Prisons

A Theoretical Understanding of Violent Offending and Victimization in Prison

Proper supervision and support of officers

Effective use of officers

Regular searches of inmates and cells

Outlets for inmates to relieve stress

Considering an inmate’s age and sex

Addressing the recency of substance use

Inmate Litigation Highlighting the Injustice of Violence in Prison

Benjamin Steiner was a professor in the School of Criminology and Criminal Justice at the University of Nebraska, Omaha until his death in January 2019. He held a PhD in Criminal Justice from the University of Cincinnati. His research and publications focused on prisoner misconduct and victimization, the consequences of in-prison misconduct and the use of solitary confinement for sanctioning offenders, and correctional officers’ attitudes and behaviors.
He amassed over 60 publications during his short career, including peer-reviewed journal articles, books, and book chapters.

holds a PhD in Sociology from the University of Illinois. He is a professor in the School of Criminal Justice at the University of Cincinnati. His research and publications focus on institutional corrections (crowding, inmate crimes, and victimizations) and criminal case processing (sentencing and recidivism, and micro- versus macro-level extralegal disparities in case processing and outcomes). He is currently involved in an NIJ-funded study of the use and impacts of restrictive housing in Ohio prisons (with Josh Cochran), and in projects focusing on prison program effects on subsequent misconduct during incarceration and post-release recidivism, and extralegal disparities in prison sanctions imposed for rule violations.