Understanding the Law for Physicians, Healthcare Professionals, and Scientists
A Primer on the Operations of the Law and the Legal System 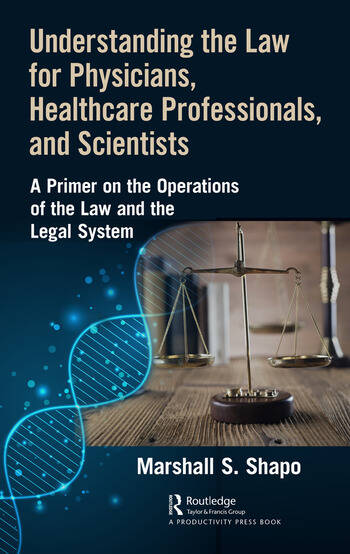 Understanding the Law for Physicians, Healthcare Professionals, and Scientists: A Primer on the Operations of the Law and the Legal System

Many workers in medicine, healthcare administration, science, and technology, no matter how strong their academic degrees or how distinguished their careers, find themselves baffled, frustrated, and even angered by their encounters with the law. Some of those occasions may lead to the need for a lawyer. But many of the bafflements and frustrations arise from ignorance about what the law is, including how it operates.

Over more than a half century of inquiry into the relations between law and science, and through numerous conversations with physicians, scientists, and healthcare professionals whose work rests on technological development, the author realized that they often desire more knowledge about the operations of the law and the legal system. This book seeks to provide basic knowledge about the law in realms where these professionals often encounter it, primarily in areas where activities pose risks of personal injury.

This book discusses two basic types of law: civil litigation and other remedies afforded to persons who ascribe injuries to the conduct or product of others, and direct regulation by the government of the levels of safety in those areas. Principal practical applications of this knowledge lie in ways to minimize risk, both in the primary sense and in efforts to avoid litigation over injuries, and in how to present arguments about policy to government officials who write laws and regulations.

A reviewer of one of Shapo's books, the 2003 work Tort Law and Culture, calls him "[a] towering presence in American tort law." His book, Compensation for Victims of Terror, brings to bear on that specific subject his background in the law of injuries. A reviewer, calling the book "excellent," summarized it as showing "both where compensation for terrorist acts already fits into the overall scheme of American law and where (and why) it might fit if future governments will address it in a purposeful, coherent, and humane way."

Professor Shapo’s other books include the magisterial four-volume treatise The Law of Products Liability, which in its just-published seventh edition has now grown to four volumes of 3,640 pages. A reviewer of an earlier edition wrote that "[m]ore than any other scholar on the planet, Marshall Shapo views and portrays the world of products liability as a living portrait," and concluded that "rarely will the analysis of a products liability issue be thorough or complete without the special lumination afforded by studying what Marshall Shapo thinks about the subject."

Professor Shapo was the principal author of Towards a Jurisprudence of Injury: The Continuing Creation of a System of Substantive Justice in American Tort Law, a thousand-page commentary written in his capacity as Reporter for the Special Committee on the Tort Liability System of the American Bar Association. A published trilogy has carried forward his ideas about experimentation on mass publics in products and the environment: A Nation of Guinea Pigs (1979), Experimenting with the Consumer (2009), and The Experimental Society (2016). Professor Shapo was an Adviser for the American Law Institute's Restatement of the Law (Third): Products Liability and has served on various committees of the Tort and Insurance Practice Section (TIPS) of the American Bar Association. He acted as co-reporter for the Symposium on Legal and Scientific Perspectives on Causation, sponsored in 1990 by TIPS and the Center for Epidemiology and Public Policy at the Johns Hopkins School of Hygiene and Public Health. He has testified several times before Congressional committees and at other hearings on various aspects of tort law. He received the Robert B. McKay Law Professor Award of the TIPS section of the American Bar Association.