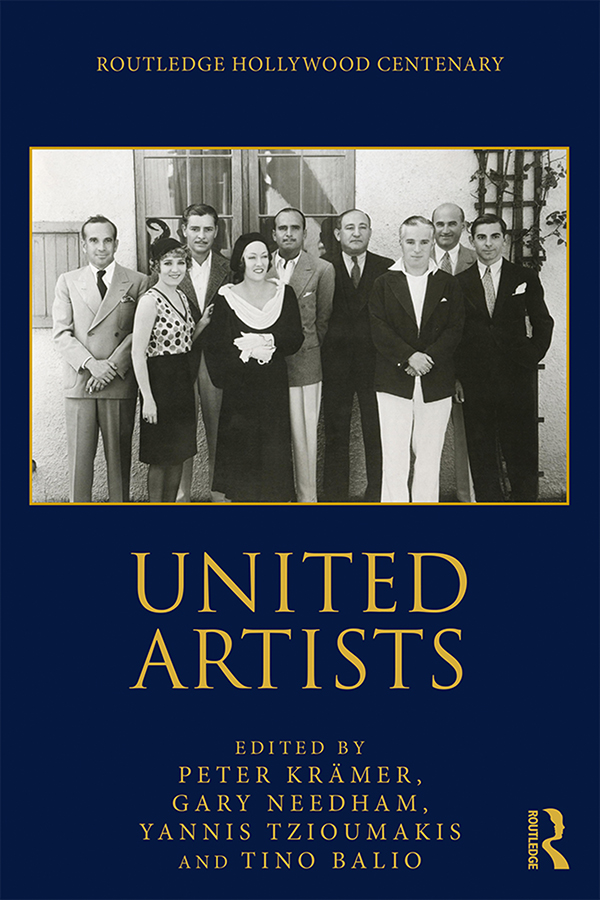 Established in 1919 by Hollywood's top talent United Artists has had an illustrious history, from Hollywood minor to industry leader to a second-tier media company in the shadow of MGM. This edited collection brings together leading film historians to examine key aspects of United Artists' centennial history from its origins to the sometimes chaotic developments of the last four decades. The focus is on several key executives – ranging from Joseph Schenck to Paula Wagner and Tom Cruise – and on many of the people making films for United Artists, including Gloria Swanson, David O. Selznick, Kirk Douglas, the Mirisch brothers and Woody Allen. Drawing on a wide range of primary sources, individual case studies explore the mutually supportive but also in places highly contentious relationships between United Artists and its producers, the difficult balance between artistic and commercial objectives, and the resulting hits and misses (among them The General, the Pink Panther franchise, Heaven’s Gate, Cruising, and Hot Tub Time Machine). The second volume in the Routledge Hollywood Centenary series, United Artists is a fascinating and comprehensive study of the firm’s history and legacy, perfect for students and researchers of cinema and film history, media Industries, and Hollywood.

Chapter 4 The Tramp, the Dictator and the Knight: United Artists and the Roadshowing of Prestige Pictures in the 1930s and 1940s – Sheldon Hall

Chapter 7 An Artist Under the Influence: United Artists and Woody Allen – Michael Petitti

Chapter 8 No Shot in the Dark: Developing the Pink Panther Franchise – Oliver Gruner

Chapter 10 ‘Cruising Is A Picture We Sincerely Wish We Did Not Have to Show’: United Artists, Ratings, Blind-bidding and the Controversy of William Friedkin’s Cruising (1980) – Gary Needham

Chapter 11 From Heaven’s Gate to Rocky IV: Reconfiguring Auteurism in United Artists’ Transition to MGM/UA in the 1980s – Nicholas Godfrey

Peter Krämer is a Senior Research Fellow in Cinema & TV in the Leicester Media School at De Montfort University, and a Senior Fellow in the School of Art, Media and American Studies at the University of East Anglia. He is the author or editor of nine academic books, including the BFI Film Classic on The General.

is Senior Lecturer in Film and Media at the University of Liverpool. He is the author of a book on Brokeback Mountain and co-editor of collections on Queer TV and the films of Andy Warhol. He is currently writing a book on the Andy Warhol/Edie Sedgwick films for Bloomsbury and co-edits the Routledge Hollywood Centenary series with Yannis Tzioumakis.

is Reader in Film and Media Industries at the University of Liverpool. He is the author of five books, most recently of Acting Indie: Industry, Aesthetics and Performance (2019 with Cynthia Baron) and co-editor of 5 collections, including The Hollywood Renaissance: Revisiting American Cinema’s Most Celebrated Era (2018). He co-edits the Routledge Hollywood Centenary and the Cinema and Youth Cultures book series.

The Routledge Hollywood Centenary is an eight volume book series dedicated to the 100 year anniversary from the establishment of the major Hollywood studios. Originally self-run organisations operating within a clearly defined film industry, from the 1960s onwards these companies have become divisions of various conglomerates during a long period of corporate consolidation and, more recently, of media convergence driven by the advent of digital technology and changes in distribution and consumption. From the ‘studio’ to the ‘post-studio’ era, from ‘Classical Hollywood’ to ‘Conglomerate Hollywood’, through changes in ownership and management regimes, and through collaborations with ever changing clusters of talent each Hollywood studio has been a major contributor to the ways in which American cinema acquired a particular identity at different historical junctures. The Routledge Hollywood Centenary volumes provide an authoritative history of these long-standing organisations and examine in detail how each studio has put an indelible stamp on American cinema and beyond.