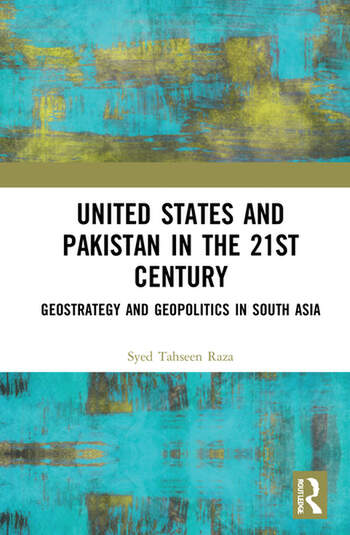 United States and Pakistan in the 21st Century: Geostrategy and Geopolitics in South Asia

This book historically maps and examines the evolving, contemporary geostrategic and geopolitical imperatives of the United States within Pakistan and the South Asian region, especially after the 9/11 incident. It offers a detailed and theoretical account of the US foreign policy towards Pakistan after 2001 in a rapidly changing context. The history of the US–Pakistan relationship has been a complex and inscrutable mix of cooperation and conflict that has turned even more challenging after 9/11. This book covers latest developments and relevant themes from world politics as it discusses the impact of the unprecedented rise in religious extremism in Pakistan on the US war on terror; Pakistan’s economic vulnerability and military dictatorship; India’s offer to support US in its war in Afghanistan; Pakistan’s nuclear capability; US administration’s decision to stop financial aids to Pakistan, etc. The study highlights that from receding British influence in the region, through the Cold War and post-Cold War phases, to the post-9/11 period, the US South Asia policy has been informed by the theoretical paradigm of the grand strategy of primacy.

Chapter 4: United States and Pakistan: An Overview of Past Relations

Chapter 5: United States Involvement in Pakistan since 2001: Confounding Problems or Moving Towards Solution

is Assistant Professor in the Department of Strategic and Security Studies, Faculty of International Studies at Aligarh Muslim University (AMU), India. Previously, he has taught at the Department of Political Science and Centre for Women’s Studies, AMU, and Department of Political Science, Miranda House, University of Delhi. An expert in international politics and security, he works on gender, peace and security, and has an interest in establishing security and peace studies programmes in India.

‘Absorbing . . . combines scholarship with readability . . . postulates a theoretical schema to explain how in practice American policy towards Pakistan has resulted in the quest for "Primacy" making the US a "monster" in the public imagination in Pakistan . . . a useful Indian counterpart to the Pakistani scholar Husain Haqqani’s Magnificent Delusion.’

‘Syed Tahseen Raza’s book is fascinating reading for anyone wishing to understand and evaluate the foreign policy behavior of the United States towards Pakistan in this century. Furthermore, this book is a key contribution that helps the reader to analyse the geo-strategic needs and compulsions of the United States in the South Asia region. Highly recommended for anyone interested in South Asian geopolitics!’

‘In this book, Syed Tahseen Raza provides a rich analysis of the "tortured" relationship between the United States and Pakistan. Using 9/11 as a historical pivot, Raza traces the continuities and discontinuities from British colonial policies, through the Cold War, to the War on Terror. The focus on America’s "Grand Strategy of Primacy" allows Raza to evaluate the shortcomings of US policy. The analysis raises important questions for rethinking international relations through a deep historical study that is situated within global geopolitics that recognises the uniqueness of the South Asian regional context and made more complicated by the particular and changing interests of the various leaders of both US and Pakistan. The book is a must-read for anyone interested in understanding the current situation and reimagining new futures beyond the "tortured" past of US–Pakistan relations."

‘In explaining US foreign policy toward Pakistan in terms of Grand Strategy of Primacy, this important book reveals the important political consequences of acting in terms of national and imperially-grounded security, rather than human security and transnational collaboration. It also exposes how fear, masked as cold, rational behavior, underlies US foreign policy toward this strategically important partner post 9/11. Its evidence-rich historical analysis makes it a must-read for analysts of US–Pakistani relationships.’

‘In this beautifully crafted book on geostrategic politics in South Asia, Syed Tahseen Raza offers a nuanced and comprehensive analysis of what the US has gained by its involvement in Pakistan in the present century. It is a useful text for both students and specialists.’

‘Unlike much of South Asian scholarship on US engagement with the region dominated by empirical description and military focus, this book nicely balances theoretical insights with empirical analysis and provides a detailed and richer understanding of how the seemingly contradictory approaches of the US toward Pakistan has evolved over the time. An important contribution to the field of International Relations and South Asian studies.’

, Professor and Head of the School of Social Sciences, University of Westminster, London, UK

‘Colonial activities are often portrayed as occurring in a bygone era, when continents and regions were viewed as playthings for the powerful, and people inhabiting these regions were treated as objects, not consent-bearing subjects entitled to determine the dynamics of their own societies and communities. In this work, exciting new scholar Dr. Syed Tahseen Raza shows the continued salience of quasi-colonial practices in our contemporary histories. In assessing the role that the United States of America has played in furthering its interest in South Asia, Raza traces the contours of its ebbs and flows through various staging points in its relationship with Pakistan. The work, which makes an important contribution to the strategic studies and international relations literature, is equally, a compelling read on contemporary foreign policy practice, set against well-known episodic landmarks including 9/11. As a consequence of its mix of theory and practice the book will be revealing to the many who are interested in the geopolitics of the region, the respective foreign policies of the United States of America and Pakistan, and to those who study and track the use of power and hegemony in world affairs. The work also provides a key perspective to those interested in anti-terrorism actions, showing how poorly designed attempts to eradicate it, may in fact have the opposite effect in sowing discord. A worthy and timely contribution from an insightful researcher and writer.’

‘Fascinating narrative. Helps us comprehend the geostrategic imperatives of the United States, as they have evolved in a rapidly changing context. Global power dynamics are exposed, with South Asia as the arena.’