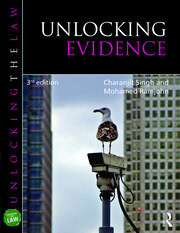 Unlocking Evidence will help you grasp the main concepts of the subject with ease. Containing accessible explanations in clear and precise terms that are easy to understand, it provides an excellent foundation for learning and revising Evidence.

The information is clearly presented in a logical structure and the following features support learning helping you to advance with confidence:

This edition has been updated to include the most recent updates in case law and criminal and civil procedure, including developments relating to vulnerable witnesses and character evidence as well as interventions by the trial judge.

1. An introduction to the substantive law of evidence 2. The law of evidence: the burdens and standards of proof 3. Testimony of witnesses 4. The disclosure of evidence and protection from disclosure: privilege and public interest immunity 5. Silence: the effect on an accusation 6. Course of trial 7. Hearsay: the exclusionary rule 8. Hearsay: admissibility in criminal cases 9. Hearsay: civil cases 10. Confessions and evidence obtained unlawfully 11. Evidence of bad character in criminal proceedings 12. Admissibility of bad character evidence of witnesses and defendants 13. Corroboration, lies, care warnings and identification evidence 14. Opinion, documentary and real evidence