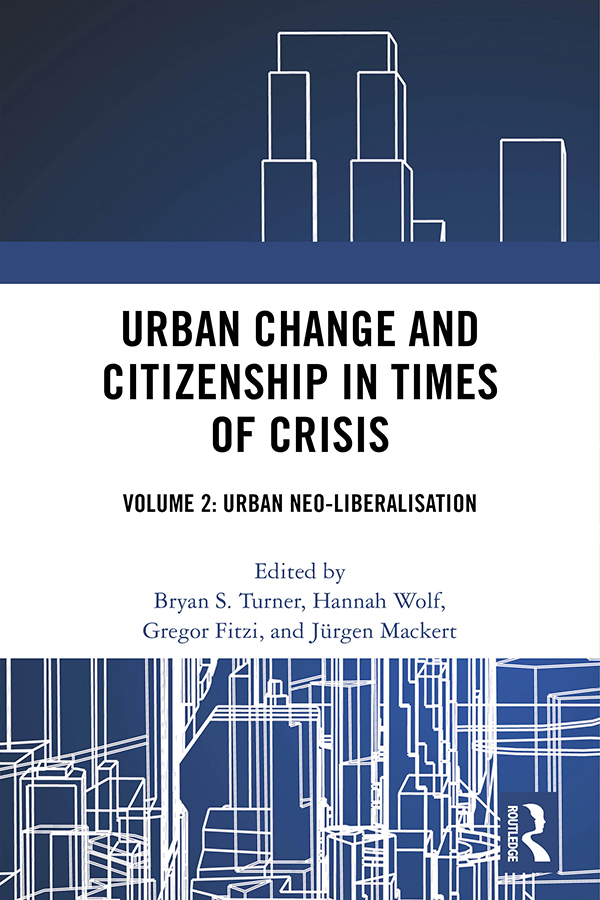 Urban Change and Citizenship in Times of Crisis

The contributions to Urban Neo-liberalisation bring together critical analyses of the dynamics and processes neo-liberalism has facilitated in urban contexts. Recent developments, such as intensified economic investment and exposure to aggressive strategies of banks, hedge-funds and investors, and long-term processes of market- and state-led urban restructuration, have produced uneven urban geographies and new forms of exclusion and marginality. These strategies have no less transformed the governance of cities by subordinating urban social life to rationalities and practices of competition within and between cities, and they also heavily impact on city inhabitants’ experience of everyday life. Against the backdrop of recent austerity politics and a marketisation of cities, this volume discusses processes of urban neo-liberalisation with regard to democracy and citizenship, inclusion and exclusion, opportunities and life chances. It addresses pressing issues of commodification of housing and home, activation of civil society, vulnerability and the right to the city.

"The embrace of markets as the means by which urban life can and should be monitored, fixed and managed never went away. Neoliberalism remains a foundational component of the imaginaries of economic and urban governance institutions. This book shows why this matters to the everyday life of cities and the people living within these increasingly fractured and unequal domains. Taking as its terrain an urban world in the midst of social, political and economic crisis this book deliberates on how this is also in many ways an urban crisis. A diverse set of empirically grounded contributions covers the key dimensions of domestic life, processes of racial banishment, eviction, foreclosure, protest, inequality, segregation and the neglect of marginal populations. This is an important and timely collection that will be consulted widely by urbanists globally."

"This volume offers a crucial set of concepts and tools to help scholars and other readers make sense of contemporary dynamics in housing and urban society. Examining cities across the world, the book systematically analyses the neoliberal assault on urban life. In its explorations of the politics and experience of dwelling in the neoliberal city, the book helps us think critically about one of the central challenges of our times."

1. Revisiting Territories of Relegation: Class, Ethnicity and State in the Making of Advanced Marginality

2. State-Making as Space-Making: The Three Modes of the Production of Space in Istanbul

3. The City as a Business

5. Governing Through Participation: Activation of Civil Commitment in Berlin’s Neighbourhoods

7. Athens in Times of Crisis: Experiences in the Maelstrom of EU Restructuring

8. The Right to the City after Grenfell

Gregor Fitzi is co-director of the Centre for Citizenship, Social Pluralism and Religious Diversity at University of Potsdam, Germany. After his PhD in Sociology at the University of Bielefeld, he was assistant professor at the Institute of Sociology, University of Heidelberg, Germany. Among his recent publications are The Challenge of Modernity. Simmel’s Sociological Theory (2019)and Populism and the Crisis of Democracy, 3 vols. edited with Gregor Fitzi and Bryan S. Turner (2019).

is Professor of Sociology and Director of the Institute for Religion Politics and Society at the Australian Catholic University, Honorary Professor and Director of the Centre for Citizenship, Social Pluralism and Religious Diversity at Potsdam University, Germany, and Emeritus Professor at the Graduate Center at the City University of New York City. He is the founding editor of the Journal of Classical Sociology. He edited the Blackwell Wiley Encyclopedia for Social Theory (2018). He was awarded a Doctor of Letters by Cambridge University in 2009 and received the Max Planck Award in social science in 2015.

is a researcher and lecturer completing her PhD at the University of Potsdam, coordinator of the Centre for Citizenship, Social Pluralism and Religious Diversity and associate member at the collaborative research centre Re-Figuration of Spaces (TU Berlin). Her academic background includes theatre and media studies, anthropology, philosophy and sociology. Her research interests lie in the political and moral economies of housing and home, citizenship, urban sociology and the sociology of everyday life.

is Professor of Sociology and a co-director of the Centre for Citizenship, Social Pluralism and Religious Pluralism at the University of Potsdam, Germany. His research interests lie in the sociology of citizenship, political economy, closure theory, (neo-)liberalism, settler colonialism, and de-democratization. His recent publication is Populism and the Crisis of Democracy, 3 vols., edited with Gregor Fitzi and Bryan S. Turner (2019).