Urban Development in China under the Institution of Land Rights 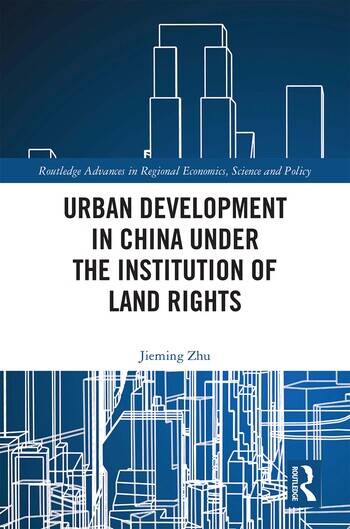 Urban Development in China under the Institution of Land Rights

How have the development and redevelopment of China’s cities since the early 1950s transformed the settlements and fortunes of a fifth of the world’s population? Rapid urbanization since the 1980s has changed the nation from a rural society to an urban one, marking it as one of the most significant transformations in history. As a country with severe land scarcity, land resources are intensively contested for during urbanization under the new regime of marketization. This book focuses on the impact of the institution of land rights that have transitioned from private ownership to socialist state ownership, and subsequently to public land leasing in the urban domain, and to collective ownership in rural areas.

In the context of defining the relationship between the state and the market, the gradualist transition of land rights gives rise to intriguing processes of place-making. The elaboration of these processes will engage several revealing conceptual notions: land as a means of production, land commodification, ambiguous land rights, incomplete land rights, trading land use rights for land development rights, institutional uncertainty, land rent seeking and dissipating, local developmental state, danwei-enterprises, and more. The newly created landed interests are embedded intricately within the urban spatial structure.

This book would especially be of interest to scholars interested in developmental economics, urban planning, geography, public policies, public management, and sociology, and also practitioners focusing on development and planning.

1. Land Rights as an Institution for Urban Development

2. Land as a Means of Production: Urban and Rural Changes without Market Mechanisms Prior to 1978

3. Restoration of Land as Assets: Genesis of a Market of Land Leasehold

4. Land Markets in the Making: A Dual Land Market and Land Rent Seeking

5. Urban Restructuring along with a Transitional Institution of Land Development Right

7. From Rural Fragmentation to Urban Integration: Governance over Spatial Change

8. Conclusion: Land Rights and Sustainable Urbanization in the Future

"Market forces are never absent from the economy, no matter the regime or its stated objectives. What is interesting is how market forces reveal themselves. Supply and demand are always in play. The formal and informal nature of property rights as they have emerged always matter. Prof. Jieming Zhu has developed an informative and readable narrative of how these observations apply to modern Chinese urban development. Rapid economic development and rapid urbanization, on scales never before seen, make this discussion valuable and poignant. The book offers a wonderful summary of how markets, especially urban land markets, function in today’s China. The book is rich in factual detail, clearly written and well-grounded in relevant property rights theory. It is informative as well as a pleasure to read." — Peter Gordon, Professor Emeritus, School of Public Policy, University of Southern California, USA

"Jieming Zhu has a clear understanding of the nuances of land rights and ‘markets’ in China and of their evolution since 1978. He depicts how these evolving and convoluted sets of rights affected behavior in land markets, the evolution of the spatial structure of cities, and inequality. I urge researchers on land markets in China to read this informative scholarly work and to carefully consider its informed perspectives."

"This book (re)examines China’s urban and rural development through the unique lens of land rights and helps us understand China’s development after the establishment of People’s Republic of China and the dynamic changes in China’s urban and rural regions. Scholars, students and professionals of planning, geography, urban studies, and so on, will definitely enjoy the profound insights and originality of what this book offers."

"Zhu describes in depth a ‘growth machine with Chinese characteristics’. Here the interests of the national and local state sometimes converge but often conflict, land is publicly owned but city officials depend on revenues from developers to finance local services, fortunes are being made from speculative building and everyone is jockeying for a share of it, while the migrants whose growing numbers support the system are mostly excluded from its benefits."

"As a young British soldier performing compulsory National Service in 1950, I was posted to Hong Kong and a camp at Lo Wu, in the shadow of the low range of hills dividing the then British colony from the newly established Chinese People’s Republic. An occasional soldiery duty was to climb to an observation post to spend 48 hours observing and reporting on activities across the border on the Chinese side. There was customarily little to report as happening across the wide but quiet view, largely of paddy fields reaching to the horizon and traversed only by the then closed railway line to Canton, now Guangzhou. In 1950, it could not be foreseen that centuries of rice production and peasant would be displaced by the megacity and modern industrial economy of Shenzhen, forming just a part of China’s exceptional and unique programme of urbanisation.

Western planners were thought that by their earlier experience of planning new towns – albeit on much lesser scale, as in the UK – they had lessons to teach for developing countries. The complexity of land issues as described by Zhu in China show how different its conditions and experience has been to that of the UK, where attempts to reform legislation for land assembly since 1945 have so repeatedly failed to bring an equitable balance between public and private interests. The balance and outcomes in China may be argued over, but the scale of what has been done is beyond compare and Zhu’s account a very important record documenting the experience."

"Jieming Zhu, a well-established scholar on China land, provides a systematic treatment of changing land institution in China. The book describes the change from land as a means of production to land as assets, highlighting complex relationship between land rent and land rights. The book is full of fresh insights and fascinating cases and has made a great contribution to China urban studies."

"Jieming Zhu’s new book viewing China’s urban development through the lens of changing land rights is an important addition to the literature on China’s march toward urbanization. By tracing the evolution of urban versus rural land rights from before and after the Economic Reforms of 1978, Professor Zhu provides a unique understanding of how the dual land market impacts the built environment. His impressive scholarship gives readers new insight into why suburban areas are characterized by low density while urban centers are overly compact as well as why unequal land rights cause rural villages to often bear the burden of unfettered urban development." — Richard Peiser, Michael D. Spear Professor of Real Estate Development, Harvard University, USA